US-born architect Neave Brown is to be awarded the Royal Institute of British Architects' Royal Gold Medal for 2018 for his contribution to social housing.

Described by the Royal Institute of British Architects (RIBA) as "a pioneer of quality public housing", Neave Brown is best known for the post-war housing he designed during his time at Camden council in north London.

"All my work! I got it just by flying blind, I seem to have been flying all my life," said Brown following the news he will receive the Royal Gold Medal.

"The Royal Gold Medal is entirely unexpected and overwhelming. It's recognition of the significance of my architecture, its quality and its current urgent social relevance. Marvellous!"

Brown, 88, is the only living architect to have all of his projects in the UK heritage listed.

"Neave's contribution to the development of modern British housing is profound, inspiring to architects, local authorities and those who have benefitted from living in one of his outstanding projects," said recently elected RIBA president Ben Derbyshire.

"His pioneering ideas firmly placed the community at the heart of each of his developments, giving residents shared gardens, their own front door, innovative flexible living spaces and private outside space for every home."

Prior housing projects in north London include a terrace on Winscombe Street built between 1963 and 1966, and the Dunboyne Road Estate constructed between 1971 and 1977. Both have been given Grade II status by public body Historic England.

The Alexandra Road Estate, completed in 1978, is Grade II* listed as a building of particular importance.

"At his Alexandra Road and Fleet Road's estates, he showed how to achieve successful high-density housing without high rise," said Derbyshire, who called on the UK's politicians to be inspired by Neave's approach to social housing.

"The UK must now look back at Neave Brown's housing ideals and his innovative architecture as we strive to solve the great housing crisis," he continued.

"The government must empower and then encourage every single council across the country to build a new generation of well-designed, affordable and sustainable homes that meet the needs of the millions of people currently failed by the housing market."

"We need to build 300,000 new homes per year for the foreseeable future to tackle this crisis: a radical programme of mass council homes, inspired by Neave Brown's work, must be part of the solution."

The Royal Gold Medal is presented annually in recognition of a significant contribution to the profession.

The 2017 medal was awarded to Brazilian architect Paulo Mendes da Rocha, and in 2016 the prize went to British-Iraqi architect Zaha Hadid. Awarded just before her unexpected death, she became the first woman to ever win the Royal Gold Medal in her own right.

Neave Brown was born in 1929 in Utica, New York, and moved to the UK as a teenager.

In addition to his work in England, he also designed projects in Italy and the Netherlands, including the Zwolestraat Development in The Hague with David Porter in 1994, and Smalle Haven residential scheme, Eindhoven, in 2002.

Due to ill health, Brown will be presented with the 2018 Royal Gold Medal at a private ceremony at the RIBA on 2 October 2017.

Portrait is by Gareth Gardner. 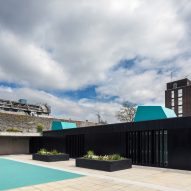