With the recent reveal of the new spacesuit for Elon Musk's company SpaceX, here's a look at some of the best recent designs readying humans for life on Mars.

SpaceX is aiming to start manned missions to Mars as soon as 2022, and the new suits could one day be worn by travellers destined for the Red Planet.

Along with SpaceX's activities, the entry of other private companies into the space race along with developments in new technology have ignited the imaginations of designers and architects, who have been devising the tools we need to set up habitation on Mars – and to survive the long journey to get there.

From "Martian concrete" to a suit for taking baths in, here are some of the most innovative designs enabling humanity to become a spacefaring civilisation:

The Galactic Everyday by Christine Lew

Central Saint Martins graduate Christine Lew designed the Galactic Everyday collection to help humans carry out normal, everyday tasks once they relocate to Mars. A suit to bathe in, a vacuum-suctioning dressing gown and a temperature-regulating duvet feature in the collection, which was developed following discussions with peers and space experts.

Read more about The Galactic Everyday ›

French designer Clément Balavoine created these flight suits specifically with SpaceX travellers in mind. The microgravity environment of space means that astronauts' bones become more fragile, and muscles lose mass – something that will affect those making the trip to Mars, expected to take 80 to 150 days.

Balavoine proposes his company SpaceX adopts these space suits to prevent that from happening. The suits are precisely tailored and support the musculoskeletal system through fabrics with electroactive fibres.

Northwestern University researchers came up with a construction material that combines Martian soil with molten sulphur, which they claim could be used to build an entire village on Mars.

Named best product at 2016's Designs of the Year awards, the Space Cup was invented by Portland State University researchers wanting to give astronauts in space an earth-like drinking experience.

As water droplets and spillages can cause major problems in space, drinks are normally contained in a sealed bag and sipped through a straw. By contrast, the Space Cup is an open vessel engineered to drive liquid towards the mouth, helping to bring a touch of normality to those on long stints in space.

Read more about the Space Cup ›

The Ice House was awarded first place in the NASA-run 3D Printed Habitat Challenge. Entrants to the competition were asked to design a base for four astronauts by using 3D printing techniques and materials indigenous to Mars.

New York studios SEArch (Space Exploration Architecture) and Clouds AO (Clouds Architecture Office) worked together on Ice House, which is built using Mars' limited water supply. A pair of icy pods are placed one inside the other to insulate inhabitants from the inhospitable climate – which can range from a temperate 20 degrees Celsius to minus 150 degrees Celsius.

Foster + Partners also submitted a design to NASA's 3D Printed Habitat Challenge, although its concept focused on the architectural potential of semi-autonomous robots and regolith – the loose soil and rocks found on the surface of the planet.

The concept involves parachuting three different kinds of semi-autonomous robot onto the surface of Mars: one that can dig a crater for building around, one that processes the regolith to create layered walls, and one that uses microwaves to fuse the material in place.

This furniture by architect and MAD founder Ma Yansong is designed to be used when humans colonise Mars. The starting point for Ma was to question what would happen if human beings moved to Mars, and whether the furniture they take with them could inspire a love for both their new and old homes.

The Institute of Isolation by Lucy McRae

Lucy McRae's short film The Institute of Isolation is a fictional examination of the ways travellers to outer space could use architecture and design to train their bodies for the challenge. McRae partnered with several designers to create a collection of speculative props for the film, including a microgravity trainer that would help prepare the body for life in space.

In the device, humans would be able to run specific fitness programmes designed to help the body adapt to new scenarios.

Read more about The Institute of Isolation ›

German designer Franziska Steingen's Soot Home Grieving Set addresses a less utopian scenario in Mars travel – what happens if one of the astronauts dies during a mission? To help their family back on earth mourn the loss, Steingen imagines a new ritual involving the burning of the deceased's personal property.

At IKEA's Democratic Design Day earlier this year, the Swedish furniture giant revealed it was working alongside NASA to figure out how interior spaces might be designed for life on Mars, and how they could make the planet feel like home to those who would live there.

The results are yet to be revealed, but given the high-profile organisations involved, the collaboration is being eagerly watched. 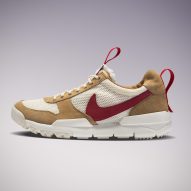