Giant triangular panels overlap to surround this American football stadium in Atlanta by architecture firm HOK, which has a roof that "opens and closes like a camera aperture".

The Mercedes-Benz Stadium, which opened in August 2017, provides a large-scale entertainment venue for the city and a new home for the Atlanta Falcons.

It replaces the Georgia Dome, located on a site beside, where the National Football League (NFL) team played for 25 years before the building was demolished in November 2017.

A key feature of the new stadium is its mechanised roof, which allows the pitch to be opened to the elements for passive cooling, or closed to create a watertight seal in poor weather.

"Inspired by the oculus in the ancient Roman Pantheon, the stadium's retractable roof is the centrepiece," said a statement from HOK.

Due to their arrangement, the petals appear to rotate as they retract in unison. But in fact each moves in a straight line, on powered rollers along a set of tracks. "The tracks allow the roof to open and close like a camera aperture," HOK said.

ETFE also covers sections of the faceted external steel structure, which fold over one another to form an enclosure around seating for 71,000 spectators. The huge panels are shaped to look like wings, as a reference to the home team's name.

"The transparency of the facade creates a 'window to the city' that provides floor-to-ceiling views of Atlanta's downtown skyline, while connecting fans to the city's landscape and offering a natural visual impact of the two million-square-foot stadium," said the architecture firm.

The Mercedes-Benz Stadium also hosts home games for Atlanta United, the city's major league soccer team, as well as concerts and performances. Retractable seats surrounding the pitch and a digitally programmable stage allow for flexibility during these events.

Several sustainable features are incorporated into the project, enabling the building to seek LEED Platinum certification from the US Green Building Council – a first for a professional sports stadium.

The site includes public spaces and areas for urban farming. Rainwater is collected and reused, while solar panels across roof and facades help to power the building.

The Mercedes-Benz Stadium has been chosen to host the 53rd Super Bowl – America's most-watched sporting event – which will take place in February 2019.

This year's game takes place Sunday 4 February, when the Philadelphia Eagles and New England Patriots will battle it out to be crowned the season's NFL champions, at a new stadium in Minneapolis by HKS.

Plans for other new American football stadiums across the US include a home for the LA Rams, a BIG-designed complex for the Washington Redskins, and a venue for the Oakland Raiders designed to entice the team to move to Las Vegas. 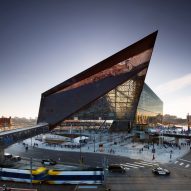