This new stadium designed for the Oakland Raiders could facilitate the American football team's proposed move to Las Vegas.

The venue's 65,000 seats would fit inside a bowl-shaped form, which would have an open side to the north and be topped with a transparent roof.

Black bands curving around the structure also feature in the design by MANICA Architecture, which has offices in Kansas City, London and Shanghai.

Although few other details have been released about the project, the images show the stadium situated close to the south end of the infamous Las Vegas Strip, behind the Mandalay Bay resort.

It is predicted to cost $1.9 billion, according to a report from the South Nevada Tourism Infrastructure Committee.

The state has reportedly approved $750 million for the new stadium, while Raiders owner Mark Davis has pledged $500 million and casino mogul Sheldon Adelson would contribute $650 million.

Las Vegas is currently without its own NFL team, and is hoping to entice the Oakland team with the new stadium.

Along with the economic benefits of in-season games, constructing the venue would also allow Sin City to host the annual Super Bowl event – which would bring in hundreds of millions of dollars.

However, Oakland isn't letting go of the Raiders without a fight.

In December 2016, the northern Californian city presented plans to replace the Coliseum – which has been the team's home since 1966 – with a new $1.3 billion venue.

A few American football teams across the country are also planning or building new stadiums.

Construction began on the new home for the LA Rams late last year, while BIG revealed its stadium design for the Washington Redskins earlier in 2016. 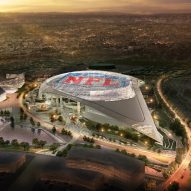