Protesters have clashed with a developer over plans to transform the Hamburg townhouse where the Gestapo interrogated victims during the second world war, as part of the development of a new urban quarter.

The project, by developer Quantum, involves converting the Stadthöfe complex in the city into luxury shops, restaurants, homes and a hotel.

One of the buildings in the complex was the headquarters of the Secret State Police. It was here that victims of the Nazis were held in the cellars during the reign of the Third Reich.

"Anyone who came here for interrogation did not come out of it," protestor Detlef Baade, whose father was tortured by Hamburg Gestapo in 1933, told local paper the Süddeutsche Zeitung. The headquarters were eventually bombed by allied planes as part of Operation Gomorrah in May of 1943.

The scheme is due to open in May 2018. Its opponents are unhappy that a planned memorial space has been repeatedly shrunk and reduced to a small exhibition space with a commercial front in the form of a bookshop and cafe.

There has also been outrage in the local press and the Guardian over the "insensitive" signage over the entrance, which critics claim closely resembles the black ironwork letters hanging over the entrance of the Dachau and Sachsenhausen concentration camps.

Cornelia Kerth, the chairman of the Association of the Persecuted of the Nazi Regime (VVN), criticised the decision to privatise the memorial, calling the plans an "international embarrassment".

The VNN have campaigned for the site to become a memorial for the victims and the anti-fascist resistance movement in Hamburg.

"There, the Nazis organised the persecution of Jews, homosexuals, Roma and Sinti and the entire political opposition. And because the townhouse was so important, the central memorial for the Nazi terror in Hamburg has to be built there," Kopitzsch told the Hamburger Morgenpost.

Initiative Gedenkort Stadthaus has been rallying around the cry: "Consumption instead of commemoration? Jamais!"

The French for "never!" is a play on Quantum's own slogan for the Stadthöfe: "Four buildings, eight yards, infinite Plaisir."

Renders from the developer of the soon-to-be-completed project show visitors wandering through green-tiled arcades of shops, eating and drinking in the restaurants and cafes of the shaded courtyard, and stepping out from a hotel lobby.

City administrators sold off the buildings to Quantum back in 2009, with the caveat that provision would be made for "worthy commemoration".

Initially plans were for a 1,000 square metres of the development to be given over to rooms dedicated to holding exhibitions, documentary showings, seminars and events.

The floorspace was then reduced to 530 square metres, and now the total space for commemorative activities is reported to be as little as 100 or 70 square metres.

This small exhibition space at the back of bookstore and cafe, which has been rejected by the descendants of those who suffered at the hands of the Gestapo as being too commercialised.

Complaints were made that Quantum had failed to hold a public discussion of the memorial. Ahead of the protests, Hamburg's cultural authority reached out to opposition groups to invite them to participate in the planning of the commemorative spaces.

"Why is the invitation coming now? Why did you fail to find a suitable bearer and a historically professional concept for the memorial in good time? Who was responsible?" asked Norbert Hackbusch, cultural policy spokesman for Germany's Die Linke political party.

It is alleged the only gesture to a memorial in the scheme will be a couple of plaques affixed to a wall and three "stumbling stones", cobblestone-sized concrete cubes set into the ground that memorialise Holocaust victims around Europe.

Dezeen approached Quantum, David Chipperfield Architects and Stephen Williams Associates for comment, but at the time of publication the architects had not responded. 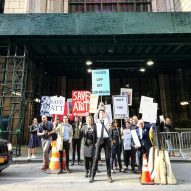 Image by Olaf Wunder for the Hamburger Morgenpost.