Vancouver-based Leckie Studio has revamped an industrial building in the city for Slack, taking design cues from the original features and the Pacific coast climate.

Leckie Studio Architecture & Design used the character of the existing structure to inform the design of the offices, the latest in a string completed for Slack as the cloud-based messaging service continues to rapidly expand.

The renovation project spans three storeys, all above ground level, totalling 13,000 square feet (1,208 square metres). Open-plan work areas occupy much of the plan, while a double-height atrium with a stadium-like staircase forms a focal point of the interior.

A palette of steel, plywood, cork and concrete ties in with the existing elements of exposed brick, timber beams, cladded ceilings, and bare mechanical fittings.

The overall interior makes a strong reference to the local climate, with a featured wall covered in moss, and timber and grey hues used to evoke the Pacific coast's landscape and weather.

"Representations of nature are placed throughout the space as reference to the larger context of the city of Vancouver and the local Pacific Northwest climate," said Leckie Studio.

A main lounge, media room and beverage station is located on the first floor. Here, a 16-foot-long (five-metre) coffee table is made from a large structural beam that was removed to create the double-height atrium.

The third floor is designed as the main area of the office, and contains a reception and lobby at the top of the large custom-designed staircase. Company-wide meetings are held on the bleachers, which are cushioned for seating large groups. A large kitchen and bar area are also located on the upper level.

Communal work areas and coffee stations take up the majority of the floors below. "There are no private offices in this project," Leckie Studio said.

Smaller work areas are housed in "meeting boxes" on wheels, while more private nooks are lined in grey felt and feature wooden ceilings with circular cut-outs.

"The intention was to use a Japanese wabi-sabi approach to complement the building's industrial character," said the designers.

Hot-rolled steel and cast-iron piping feature on windowed walls, doors and furniture pieces. "Interior systems and furnishings are locally fabricated, robust, and [we hope] would age gracefully in place over years of heavy use," the studio said.

The office is located in Yaletown, with nearby projects including a silver-walled fashion store also inside a renovated warehouse by Casper Mueller Kneer and an ice cream shoppe with white-washed exposed brick walls by Scott & Scott Architects.

Slack is headquartered in San Francisco, but has opened offices worldwide since it was founded in 2009. In New York, the company's Snøhetta-designed workspace features wooden bleachers and planted screens, while ODOS Architects created timber and concrete interiors for its Dublin outpost.

The company also recently moved into an office in Toronto, where Dubbeldam Architecture + Design used a set of colourful cables to connect the spaces. 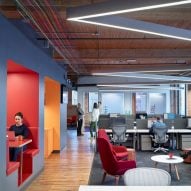