US design studio Basic Projects has gutted a restaurant in South Carolina and transformed the dark interior into an eclectic, light-filled dining space.

With a spacious layout, large windows and high ceilings, the eatery in Charleston was renovated by its owners, Kate and Ben Towell of Basic Projects.

The restaurant is located in the historic district of the southern US city, known for its architectural and coastal charm – with hundreds of colourful well-preserved buildings in an eclectic mix of colonial, Georgian, gothic revival and Italianate styles.

The local design studio fully gutted the interior, which was originally a pizza restaurant at the bottom of a historic two-storey residence.

A pathway that runs the length of the restaurant informs the placement of various seating areas. A new built-in bar with swivel metal barstools is on one side, with lightwood communal tables and benches on the other. Just beyond is a kitchen and bathrooms, located in the middle of the space.

"We uncovered the fireplace from layers of sheetrock [drywall] and built a brand new kitchen and bathrooms," said the studio. "The walls of the old restaurant were almost black, it was a very dark place and we knew we had to utilise those large windows."

In the back is a new cobblestone patio, which was previously an unused site with a chain link fence. A large amount of plants fills this outdoor area, complete with wooden benches and tables, and white-painted timber walls.

"We brought in old Savannah grey brick and laid it down to make the patio," said Kate Towell. "We bought palm trees from Florida after the hurricane last year and had them planted there, and a whole bunch of other tropical greens."

Inside, white walls and concrete floors act as a base for the variety of differently decorated seating areas with vintage art pieces throughout.

"The rattan mushroom lamps on the bar and the large bamboo framed oil painting we found in Asheville," said the studio.

A large U-shaped booth is covered in a caramel-hued leather and fronted by other smaller tables. Golden piano-style desk lamps are affixed to the walls as scones, placed in between sections of the large windows.

A surfboard over the front glazed section is a nod to the city's surf and maritime history.

Basic Projects also created the branding and menu for Basic Kitchen, following Ben's involvement in the food and overall design of The Fat Radish restaurant in New York City.

"We started with residential renovations and organically moved onto larger commercial renovations," said Kate. "With Ben's restaurant and chef background, we decided we would love to do a restaurant down here in Charleston and create a place where we would like to eat everyday."

Photography is by Olivia Rae James. 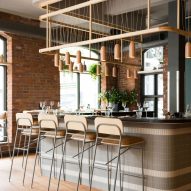