Architectural photographer James Brittain has explored the hidden nooks and apartments of Moshe Safdie's Habitat 67, offering a glimpse of day-to-day life in the famous brutalist complex in Montreal over 50 years after it was completed.

Rather than focusing on the "formally breathtaking" elements of the Israeli-Canadian architect's groundbreaking 1960s housing complex, Brittain's Revisited: Habitat 67 series documents how the building is today – including its occupied apartments and water-marked concrete walls.

The local photographer spent a period of 12 months capturing Habitat 67, working in collaboration with its residents who let him into their homes and take their portraits.

"My interest for the photography was less in the formal architectural qualities, and more in how the place is lived in, has been adapted, and is experienced by the residents," Brittain told Dezeen.

One shot shows a couple looking directly at the camera, and the surrounding apartment decorated with wooden furnishings and plants.

In apartment number 243, residents have furnished the doorstep with a potted plant, stone bench and sculpture.

Other living spaces include a light-filled dining room encased by a ribbed wooden structure that covers the wall and ceiling. A cat can be seen sitting on the floor, just in front of its food bowl.

Also exploring the communal areas of the complex, Brittain has photographed a cleaner at work with the building's impressive concrete structure rising in the backdrop.

He found dark nooks in between some of the 354 stacked "boxes" that make up the building, and more mundane aspects like a car parked in the garage.

Habitat 67 was presented by Safdie at the 1967 World Expo in Montreal. Located at 2600 Avenue Pierre-Dupuy on the Marc-Drouin Quay, the concrete complex is a example of brutalist architecture – the controversial 20th-century style that has since come back in vogue.

The development is highly regarded for its experimental approach to housing, creating high-density living in a way that allowed for fast construction and for each home to have plenty of outdoor space. During his project, Brittain observed that Safdie's ideas were still successful today.

"The core ideas [Safdie] originally pioneered at Habitat 67 are still highly relevant today," he said. "Prefabrication, and how to make a place for living in a city that is spatially generous, efficient and with an abundance of natural light and outdoor space – while retaining a similar density to a traditional tower block."

"And with a strong emphasis on people and community," Brittain added.

The Revisited: Habitat 67 series forms part of his "ongoing" experiment into architectural photography, which he said was prompted by the lack of experiential qualities found in contemporary shots.

"The photographs are a response to the daily dose of digital imagery of architecture on social media and the web," said Brittain.

"Mainstream photography of architecture has largely withdrawn from communicating the experience of buildings and spaces, and specific moments spent in places."

Brittain's Revisited: Habitat 67 is being exhibited at the London studio of architectural firm Jonathan Tuckey Design, alongside archival material that the photographer sourced from the Canadian Centre for Architecture and Canadian Architecture Collection at McGill University.

The photography exhibition will be open to the public on 10 and 11 February 2018 at Jonathan Tuckey Design, on 58 Milson Road. It marks the first in a series of showcases and talks focused on existing structures that architects Jonathan Tuckey and Peter Youthed have organised for a programme titled Building on the Built. 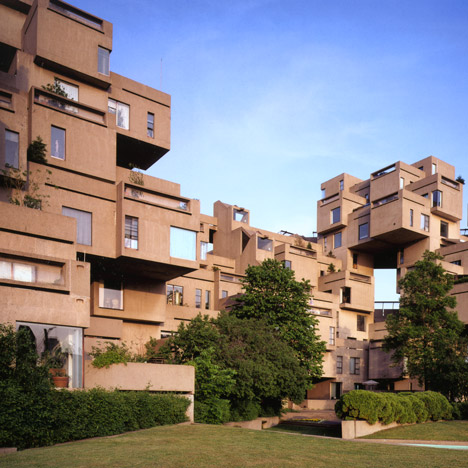