New York architecture studio DFA has imagined a series of latticed apartment towers for Manhattan's Pier 40, which would be able to remain above water in the event of rising sea levels.

DFA's conceptual proposal involves constructing a complex of housing, recreational and commercial facilities on the square-shaped Pier 40. The structure extends 250 metres over the Hudson River and currently houses car parking facilities and a popular football field.

By adapting the existing pier – which was built in 1962 and fallen into disrepair – the architecture studio is offering several responses to current issues in New York City, including a lack of affordable housing and resiliency to flooding due to climate change.

"We see so many projects going up in New York that are quick, chart-driven responses to serious problems," said DFA founding principle Laith Sayigh. "These short-term resolutions will not safeguard the city from rapid changes in the environment or protect future generations of people."

The concept envisions 19 cylindrical high-rises, wrapped in golden net-shaped window frames and planting. These would house a total of 450 living units, which would be sold at price points from affordable to luxury.

Ranging from 96 to 455 feet (29 to 138 metres) tall, the towers would be set in 11 clusters that the architecture firm based on analysis of the pier's structural base – comprising thousands of steel H-pile girders reinforced with concrete and sunk into the river.

The residences in the towers would be elevated 60 inches (1.5 metres) above expected storm surge levels as one of a series of ways to protect the complex from flooding caused by sea-level rise.

An elevated undulating pathway would wrap around the bases of the clusters, over a series of public pavilions. These would remain open until 2050, when water levels are expected to increase between 11 and 30 inches (30 and 76 centimetres).

But 50 years later, when the tidal river could be 50 to 75 inches (1.3 to 1.9 metres) higher, the pavilions would be completely submerged by water. In this scenario, the platform above would provide the new access for the complex.

"Beyond 2050, as regular flooding begins to engulf the coastline as we know it, the landscape deck transforms into a floating island with new pathways built to connect the evolved wetland ecosystem to Manhattan," said DFA.

Other resilient features of the complex include a series of pods that will float around the pier to act as a buffer to damage during storms.

DFA – which stands for D Form A – developed its Pier 40 proposal as part of a series of projects that imagine a better future of the New York City. The firm has also proposed a prefabricated timber tower for New York's Central Park that would both filter a contaminated reservoir and provide views over the city. 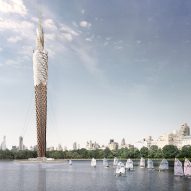