Pleated fabrics, self-watering plant pots and a new take on the sofa bed all feature in the inaugural homeware collection from new Norwegian brand Northern.

The company, now known simply as Northern, debuted its collection last week at the Stockholm Furniture Fair, which took place during the city's design week.

"Our first design studio was always about more than illumination. We pushed the boundaries of shape, form and materials so far that furniture design and interior accessories just felt like a natural next step. So we called it Northern," said the brand.

"By eliminating the last part of our name, extending our portfolio to furniture and interior accessories became a possibility."

Sixteen designers from seven different countries were invited to contribute designs that offered "understated luxury" with a Nordic approach in mind.

The Daybe features a detachable backrest that can slide onto the floor to convert the sofa into a bed without the use of conventional coils, levers and springs. Each is available in a variety of fabrics and colours from dusty pink to grey from Danish textile brand Kvadrat.

Also featuring in the new range are a series of self-watering planters by Norwegian designer Ann Kristin Einarsen.

The terracotta plant pots are made up of interlocking containers that act as both a stable base and an integrated water reservoir.

Each is filled with water through a side opening. The self-watering function is activated when the upper container absorbs the water held in the base below.

The unglazed finish of the Oasis pot allows water to be drawn from the base and transmitted into the soil carried inside. Each base is coloured in green, black or white, contrasting to the natural brick-like colouring of the terracotta.

The shade is made from wool treated with a lamination process, which is held in shape by an interior construction. By tilting the shade to one side, light can be cast in the opposite direction onto certain parts of the room.

Described by the studio as "a unique hybrid of hand-craftsmanship and fibre innovation," the Fold light has also been designed with sound-absorbing acoustic properties.

Also featuring in the new collection are a trio of ballet-inspired figurines by Bergen-based design studio Vera & Kyte.

Taking cues from the shapes of the ballet costumes associated with the avant-garde art movement, Vera & Kyte's tabletop accessories can spin on their bases to emulate the motion of a twirling dancer.

According to the studio, the figures are constructed in the "timeless" colours of yellow, pink and black to represent the costumes and set designs that were typical of the 1920's Triadic ballet.

Other designs in the collection include a smoked oak minimalistic drinks cabinet by Swedish duo Färg & Blanche, which uses polished laminate to create a mirrored effect, and Johan Lindsten's matt-black lamps that can be adjusted using rotating gears.

Cecilia Xinyu Zhang is also among the team of 16 designers involved in the project, and created two architecture-inspired space-saving units that can be used as a clothes rack or a decorative structure to hold photos, lights or ornaments.

Northern describes the resulting collection of homeware products as being bold interpretations of classic forms, which each use natural materials to take an "edgy" approach to contemporary design.

The collection was showcased at the Stockholm Furniture fair, which ran as part of the city's annual design week from 5 till 11 February this year.

The show also saw students from the Royal Danish Academy of Fine Arts create a collection of furniture for school classrooms, designed to help children stay focused during lessons. 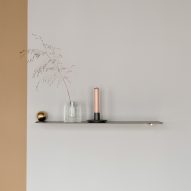 Ferm Living's Flying Shelves are an "exercise in perfect balance"