Universities in the UK have received more applications from EU citizens for art and design courses this year, belying fears that Brexit would lead to falling demand.

Figures from the Universities and Colleges Admissions Service (UCAS) show there was a six per cent increase in EU applicants from outside the UK for courses in creative arts and design courses in 2018, when compared to 2017.

The increase follows a five per cent fall in EU applicants last year.

In architecture, building and planning, UCAS reported a three per cent increase in applicants from the UK. There was no change in the number of non-UK EU architecture applicants, but including all overseas applications there was a two per cent rise.

The EU figures appear to run counter to predictions that the Brexit vote would lead to "disaster" for the UK design education sector.

The Council for Higher Education in Art & Design warned in 2016 that Brexit "may lead to significant impact on staff and student recruitment, competitiveness and prestige of UK creative higher education and creative industries at a time when global competition in these areas is likely to increase steeply."

Around the same time, University of the Arts London reported a drop in EU applications and cancellations from students who had accepted offers.

"That's a disaster, because the reputation and the prosperity of our sector depends on the steady intake of talent, particularly from the EU," UAL governor and London Design Festival co-founder Ben Evans told Dezeen in 2016.

"It is a point about them feeling less welcome in our city, and insecure about coming and taking up a three-year degree course in London," he said.

Central Saint Martins art school, which is part of UAL, also feared it would be hit by the vote.  has been outspoken in his in his concern over the potential impact of Brexit on creative institutions.

"I've got over 800 EU students," said CSM head Jeremy Till after the Brexit vote. "We're concerned that it will be a loss to the college – not in terms of financial loss, but in terms of cultural loss."

However UAL has now told Dezeen that it too has seen an increase in overseas applications this year, with non-UK undergraduate applications from the EU up nine per cent.

“UAL continues to be an attractive destination for talented and ambitious students and we have experienced an increase in the number of non-UK EU art, design and fashion students wanting to come to our university," said a UAL spokesperson.

Sharp uptake could be short-term surge before Brexit

Although questions remain over the future rights of EU citizens to remain in the UK after it leaves the European Union, the UK government has said that those who arrive before the official leave date of 29 March 2019 will be allowed to stay for five years and apply to remain indefinitely.

The statistics could also be interpreted as a vote of confidence in the quality of higher education offered by the UK. Universities UK chief executive Alistair Jarvis claimed that the increase in international applications "shows that the UK remains one of the most attractive destinations in the world for talented, international students."

Number of UK students applying for creative courses down again

The boost in overseas students comes at a time of rising concern over domestic applications for creative arts and design courses, with numbers of students from the UK continuing to fall.

UAL saw the number of undergraduate UK student applications fall three per cent this year, in line with the UCAS data.

"We are all facing similar challenges, including the demographic decline in the UK’s young population. However, creativity is one of the UK's greatest assets and we continue to nurture and champion it," added the spokesperson.

"In spite of the uncertainties the picture is mixed and in some subject areas (for example Graphic Design, Fine Art, Photography) there is a positive improvement in the number home applications, indeed in broad terms, the fall in creative arts applications is less than last year." 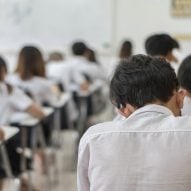