British visualisation studio The Boundary has created a series of renderings depicting a "super luxury" hotel planned for a secret site in Arizona's Sonoran desert.

Henry Goss Architects designed the hotel concept for a private client, who has been working with The Boundary – the rendering studio ran by Henry Goss and visualiser Peter Guthrie – for several years.

The building comprises two longitudinal blocks that overlap to create a partial upper storey. Fins of concrete set between the floor and roof slabs promise to offer uninterrupted views out into the landscape – a key point in the brief.

A sparse material palette of exposed concrete, wood and glass is planned to create a sense of "pared-back luxury" for the retreat, which could cost in the region of $15 million (£10.5 million).

It would cater for four couples as well as "extensive" staff, who would be housed on a separate site.

"It is all quite pi-in-the-sky in some ways, as many of these projects are for the American super-rich, but it's been a really cool project to work on," Goss told Dezeen.

"It is also a very interesting example of how our rendering work is beginning to attract architectural commissions rather than the other way round."

While The Boundary has created numerous sets of renderings for the client for larger commercial projects in the US, this is the first architectural commission for Goss.

He and Guthrie have become well-known in the industry for their incredibly detailed hyper-realistic renderings. Their success had led Goss away from architecture as commissions grow, but he said his visualisation work is now leading him back to design.

The client originally got in touch with the pair after the publication of the studio's renderings for 152 Elizabeth Street by Tadao Ando in New York, and Carey House in Hertfordshire, which they spotted on Dezeen.

"In a recent turn of events we have now found ourselves in the paradoxical position whereby rather than published architectural designs attracting rendering commissions, we now have renders (particularly within the New York real estate market) eliciting architectural enquiries," said the duo.

"The kind of people who spend $50 million on a new New York penthouse are not in the business of owning only one property," they added.

"For some of these individuals, private land acquired across the world provides numerous opportunities for some often outrageous ideas and design propositions."

The new images show flooring continue seamlessly through the facade of the hotel, to create patios that extend towards a landscape of rockeries and an undefined perimeter with the desert beyond.

A pool is also shown extending out through one section of glazing at right angles to the building before tapering away into the landscaping.

"Ambiguity between inside and out is a key driving factor behind the design," explained the pair. "The ground plane is literally carved out of the rock and in contrast to the rigour of the building's geometry allows the natural topography to dictate the more organic stepped terraces bleeding into nature."

Climatic considerations were also a deciding factor in the choice of cast-in-situ concrete for the structure, with set-back glazing to ensure shade from the harsh sunlight.

A fire integrated into a wall by the pool offers extra warmth after nightfall for both an internal lounge and a seating area sunken into an outdoor patio.

The rendering are dressed with a suite of furniture the studio also desugned for the project – including wooden and stainless-steel chairs – and which it will continue to develop independently from this scheme.

Goss and Guthrie's plans were to use the renderings to express the "essence of the scheme" rather than the specific details of the design or location.

"The principle aim was to create a convincing 3D world which could be inhabited and 'virtually' photographed," Goss told Dezeen.

"This then gave us the freedom of generating any kind of atmosphere that we or the client wished to test without being constrained by site photography," he added.

"This was important in the design development but will also be crucial in the potential marketing and investment stages of the project."

Goss and Guthrie used a combination of programs and techniques to generate the imagery – which also produced animation and virtual reality options – ranging from 3DS Max and Sketup to Marvellous Designer, World Machine, Corona Renderer and Photoshop.

To evoke the arid, hazy setting they also used Guthrie's HDRI Skies – a set of 360-degree photographs taken in the Moroccan desert at a similar latitude to the Sonoran Desert. 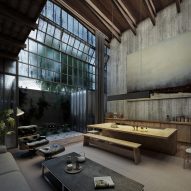