Korean designer Koo Hyeonjeong has created a conceptual tool for women, which could allow them to impregnate themselves through the use of a hand-shaped pump.

Named the Seeding Finger, the device is described by Hyeonjeong as a "secondary reproductive system", and is modelled on a hand with one enlarged digit.

The device is designed to work through the use of three main sections: a "pouch" that holds the sperm, a "tube" that the sperm travels through, and a "stem" for inserting the sperm into the vagina.

Once sperm has been inserted into the small pouch, it is then slotted inside the palm section of the hand.

The user simply squeezes the hand, causing the sperm to travel through the tube section running up through the middle of the enlarged finger.

The sperm then comes out through the fingertip, into the vagina – thus allowing the user the chance to "become pregnant by herself".

A conceptual device, Hyeonjeong developed the Seeding Finger with the view of starting a discussion about the role of pregnancy and traditional family set-ups in the present day.

The artist added that it could "maximize women's enjoyment, subjectivity and independence".

"As women can become pregnant by themselves, the existing family ideology such as a single-parent family and same-sex family will change," said the Seoul-based artist. "The discourse that Seeding Finger will bring will be a catalyst to redefine the relationship and reality among people."

"Through the Seeding Finger, people will interpret familism and individualism as a transformation of familism through dialectics of familism and autonomy, not as a mutual confrontation," Hyeonjeong continued.

Hyeonjeong, who studied industrial design at the Ewha Womans University in Seoul, often turns her attention to health-related projects.

Previously, she designed a "co-incubating system" for premature babies that provides them with all the necessary nutrients, and a glass that measures cortisol levels in saliva as you drink water – providing data on the body's condition. 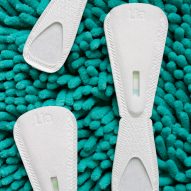