A 356.5-metre skyscraper topped with swimming pools and a golden latticed roof in Dubai has won the title of the world's tallest hotel.

Developed by the Al Attar Group on a plot measuring 30 square metres, the Gevora Hotel stretches almost a quarter of a mile into the air.

The Guinness Book of World Records ratified its claim as the world's tallest hotel, a title previously held by the 355-metre-high JW Marriott Marquis Dubai towers, which is also located on Sheikh Zayed Road – the longest road in the United Arab Emirates.

A facade of gold-tinted glass covers most of the 75-storey structure, which is topped by a matching gold lattice of beams that form a pointed tip.

Six elevators operate at a speed of 26 kilometres an hour, taking guests from the ground to the uppermost floor in just 38 seconds. A viewing gallery on the 71st floor allows visitors to look out over the sprawling desert city below.

The Gevora claims to have the highest swimming pools in the world. It also has a jacuzzi, health club and spa, and four restaurants.

Another recently completed pool project is Kohn Pedersen Fox's 68-storey skyscraper New York, which has laid claim to the honour of having "highest residential infinity pool in the western hemisphere".

The Frame opened earlier this year amid claims from Rotterdam-based architect Fernando Donis that his original competition-winning design was used without compensation.

Dubai now has seven of the world's tallest hotels, including 333-mtre tall Rose Rayhaan by Rotana and the 321-metre Burj Al Arab, which is famous for its sail-like shape.

The city is also home to the world's tallest building, the Skidmore, Owings and Merrill-designed Burj Khalifa, which is 828 metres tall. 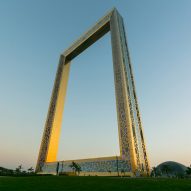