Kohn Pedersen Fox's 68-storey skyscraper in Downtown Brooklyn will include the "highest residential infinity pool in the western hemisphere" on its roof.

Two new renderings show the infinity pool as part of a "rooftop retreat" that New York-based firm Mathews Nielsen Landscape Architects has designed for the Brooklyn Point residential tower, which is set to become the New York borough's second tallest building once complete.

At 680 feet (207 metres) above grade, the pool will claim the title of highest residential infinity pool in the western hemisphere, according to a statement from developers Extell.

The Brooklyn Point pool will be positioned on the corner of the skyscraper's roof, where the building's facades will angle down to provide swimmers with a view across to Manhattan.

The rooftop amenities for residents will also include a wooden deck for sunbathing and stargazing, a cinema for outdoor film screenings, changing rooms and showers.

Revealed in October 2017, Brooklyn Point is currently under construction as part of the final phase of the wider City Point development, and is slated for completion in 2020.

It is set to be renamed 1 City Point, and join Extell's neighbouring City Point Tower One, which broke ground last year.

Architecture firm Kohn Pedersen Fox (KPF) has chosen to wrap the building with faceted glass walls that will "add depth and texture to the exterior".

KPF's other skyscrapers underway in New York include 30 Hudson Yards, billed to become the second-tallest office building in the city once completed next year, and One Vanderbilt – currently under construction beside Grand Central Station and on track to be the city's second tallest skyscraper. 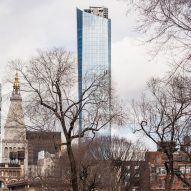 Renderings are by Williams New York.