Scooped white columns resembling upturned arches provide a decorative facade for the Coachella Valley Savings & Loan bank designed by E Stewart Williams, which is next up in our series spotlighting Palm Springs' mid-century architecture during the city's Modernism Week.

The Palm Springs-based architect – who founded his firm Williams, Williams & Williams with his father and brother – designed Coachella Valley Savings and Loan #2 on the city's South Palm Canyon Drive.

Having already built a Coachella Valley Savings and Loan building in Palm Springs, Williams was enlisted by the bank for a second time to create a larger space that would accommodate its expansion.

The two-storey building was completed in 1961 during the city's boom of "desert modernism" – a mid-20th century style that adapted European modernist design principles to suit the desert valley's dry and arid climate.

Like many others structures built from this movement, the bank has a simple cube shape topped by a slender overhanging roof, which – along with the panels covering the walls – offers shade from the strong desert sun. Openings are left at the top of the walls to ensure there is plenty of natural light inside.

The sculptural white colonnade along the building's front is both decorative and bolsters the structure in the event earthquakes. At the base, the columns join to form scooped bottoms and resemble the distinctive facade of Alvorada Palace that Brazilian modernist Oscar Niemeyer completed in 1958.

Although Williams reportedly denies basing his design on the Niemeyer residence, the slim pool with fountains at the front of the bank is also similar to the mass of water surrounding the presidential residence in Brasilia.

It is not the only financial establishment in Palm Springs to resemble a famous modernist building: a nearby Bank of America is modelled on Le Corbusier's chapel in Ronchamp, France.

Water flows underneath Williams' bank through a second row arches that are laid to mirror the colonnade above. This under structure also supports the cantilevered ground floor.

The architect resolved the site's 10-foot (three-metre) level difference by placing a two-storey car park at the rear and creating entrances on the two different levels. One leads to the main lobby on the lower floor, and the other to a mezzanine that hangs from the ceiling.

Inside, the steel and concrete construction allows for large open floor plans uninterrupted by columns.

Today, the Coachella Valley Savings and Loan #2 operates as a Chase branch, and is among a number of projects Williams completed in Palm Springs. They include the Santa Fe Savings and Loan, which is now the Palm Springs Art Museum Architecture and Design Center, and a private retreat for Frank Sinatra.

As one of the influential modernist architects credited with shaping Coachella Valley, Williams' work is being celebrated during Palm Springs Modernism Week from 15 to 25 February 2018.

Dezeen is marking the occasion with a series of articles that spotlight the city's most important examples of modernism, from gas stations and celebrity residences to other banks. 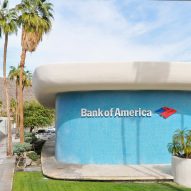 Top photograph is by David A Lee.