World Heritage Corb: next up in our series on the 17 buildings by Le Corbusier that have been added to UNESCO's World Heritage List is the architect's Chapelle Notre Dame du Haut, the small chapel in Ronchamp, France, that has become one of his most iconic designs.

Completed in 1954, the Ronchamp chapel was built for a Catholic church on a pre-existing pilgrimage site. The previous stone building had been largely destroyed during the second world war.

It is considered one of the most important buildings of the 20th century, and represents a key shift away from the sparse, functionalist form of Modernism that Le Corbusier displayed in his earlier projects.

The main structure consists of thick masonry walls, which are curved to improve stability and provide structural support.

The monumental curved concrete roof is a shell structure supported by columns hidden in the walls. A gap underneath allows a sliver of light to filter into the interior.

Although its external appearance suggests a complicated layout, the interior is fairly simple in plan.

Three thick white walls curl inwards from the outside to create smaller chapels at the sides of the main space. Two sit on either side of the north entrance and one in the south-east corner next to the main entrance.

The interior of one of the chapels is painted bright red and the sacristy on the north side is painted violet – echoing the bright sections of colour in the architect's Dominican Monastery of La Tourette.

The floor follows the slope of the site towards the main altar, and is covered with a concrete surface that was poured on site and divided into a gridded pattern based on the architect's Modulor system of proportions. 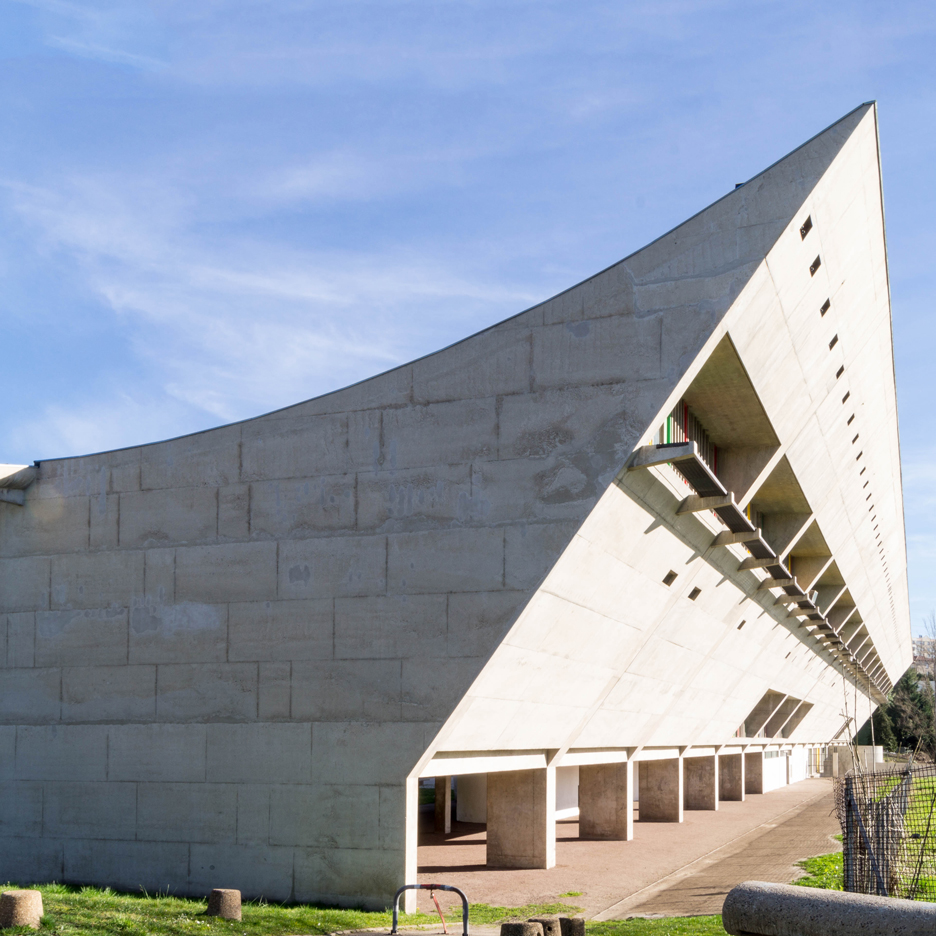 An irregular arrangement of windows is scattered across the walls. These are glazed with a mixture of clear and coloured glass.

"This has no connection to stained glass; Le Corbusier considers that this form of illumination is too closely bound to old architectural notions, particularly to Romanesque and Gothic art," explained the Fondation Le Corbusier, a non-profit organisation set up to help protect the architect's legacy.

"Therefore here there is no stained glass, but glazing through which one can see the clouds, or the movements of the foliage and even passers-by," it said.

The internal and external walls were finished with mortar, which was sprayed onto the surfaces before being whitewashed or painted. The roof was left raw, showing the board marks from the casting of the concrete.

In 2011 Renzo Piano Building Workshop completed a monastery at the foot of the hill on which the Ronchamp chapel sits.

But in 2014, the chapel was vandalised and a hand-painted glass panel by the architect was broken. This prompted calls for emergency security measures to protect the building.

They show huge colourful images covering the walls of the chapel, mimicking the paintings the architect controversially applied to the walls of Eileen Gray's seminal E-1027 house on the Côte d'Azur. Gray described the murals as vandalism.

Delory said the series was meant to act as a reminder that all Modernist buildings were designed to be able to adapt to radical change.

Notre Dame du Haut is one of 17 buildings by Le Corbusier that have been added to UNESCO's World Heritage List of internationally significant architecture sites this month.

Others added to the list include his tiny holiday cabin on the Côte d'Azur and the Unité d'Habitation housing in Marseille.