An exhibition at London's Design Museum will present the most poignant political graphic iconography from the past decade, created in the wakes of events such as the Charlie Hebdo attacks, Brexit, and Donald Trump's presidency.

Called Hope to Nope, the exhibition will feature traditional posters and banners that have widely circulated in popular culture in the past 10 years, as well as charting the rise of digital media and social networking.

It plans to illustrate the role of graphic design and technology in influencing opinion, arousing debate, and encouraging activism – tracing the course from "hope" to "nope" with paraphernalia such as the iconic Barack Obama "Hope" poster by Shepard Fairey, which incited the Donald Trump "Nope" meme.

"The rise of social media has changed the way graphic political messages are made and disseminated," said the Design Museum. "As traditional media rubs shoulders with hashtags and memes, the influence and impact of graphic design has never been greater."

"The exhibition demonstrates how technology and graphic design are weapons wielded by the powerful and the marginalised alike."

Hope to Nope will also cover other landmark events such as the 2008 financial crash, the worldwide Occupy movement, the Deepwater Horizon oil spill, and the Arab Spring.

Composed of three main sections – Power, Protest and Personality – the show will feature a large graphic timeline, dividing the gallery space and charting the role of social technologies such as Facebook and Twitter in worldwide events from the past 10 years.

Power will look at the ways in which graphic design is used by leading institutions to assert national and political authority, and how this has then been subverted by activists and rivals – for instance, when various Soviet posters were transformed into a gay rights campaign.

The largest section in the exhibition, Protest, will showcase graphic design by campaigners and demonstrators, including an umbrella used during the 2014 Hong Kong Umbrella Revolution, newspapers from the 2011–12 Occupy London camp and responses to the 2017 Grenfell Tower fire.

Lastly, the Personality section will display how leading political figures have been represented in graphic design, and among youth culture.

Examples include the younger generations' support for Labour party leader Jeremy Corbyn, which manifested in an unofficial Nike t-shirt and an independently published comic book that portrays the party leader as a superhero.

Caricatured illustrations of Donald Trump by major US publications such as The New Yorker, The Economist, and Time will also be on show in this section.

The Personality section also features paraphernalia such as the smiling Guy Fawkes mask, which preserves the identities of those involved in the international hacktivist network, Anonymous.

Hope to Nope is co-curated by the Design Museum's Margaret Cubbage and GraphicDesign&'s Lucienne Roberts and David Shaw, with Rebecca Wright, and will run from 28 March to 12 August 2018.

The museum's current exhibitions include Ferrari: Under the Skin – a retrospective celebrating 70 years of Ferrari design with 14 rare sports cars, which closes 15 April 2018.

Other shows to look forward to in London include The Future Starts Here, opening at the Victoria and Albert Museum in May, which will imagine the future in 100 completed designs to attempt to eradicate uncertainty, including a crowd-funded pedestrian bridge, and the world's first carbon-neutral, zero-waste city designed by Foster + Partners. 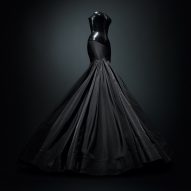