Paper light sculptures by renowned Japanese artist and landscape architect Isamu Noguchi served as the inspiration for this range of table lamps by Nendo.

Nendo based its Light Fragment collection on Noguchi's Akari lighting series, which he created in 1951 on a visit to Gifu – a town in Japan known for its manufacture of paper parasols and lanterns.

It was here the designer sketched his first two lamps, but afterwards went on to produce a total of more than 100 models, consisting of table, floor and ceiling lamps characterised by their lightweight Shoji paper shades.

Noguchi, who often created larger pieces made from stone, regarded the Akari collection as luminescent sculptures, rather than lighting equipment.

"We imagined, what if Akari had been carved directly from a massive form of light?" explained Nendo. "It gave us an idea that the fragments from the carved stone should be beautifully luminous."

The studio began by carefully hand-carving boards of white acrylic in a gradational process, turning them from opaque to translucent until they became extremely thin and transparent.

The fragments were then enveloped in a transparent acrylic cube wrapped with an aluminium pipe embedded with LEDs.

The light from the LEDs shines into the acrylic, revealing the paper-like forms within.

"By lighting these pieces externally, light-fragments were represented," said the Japanese studio.

In tribute to the wire legs of Noguchi's original Akari collection, Nendo selected black lamp legs with a round black foot.

Through its design, the studio also looked to the Japanese character for Akari (明) – noting that it is made up of two kanji elements, 日 (hi), meaning sun, and 月 (Tsuki), meaning moon.

"This lamp replicates the relationship between the sun and the moon," it said.

The pieces are currently on show at the Noguchi Museum in Queens, New York as part of an exhibition titled Akari Unfolded: A Collection by Ymer&Malta. 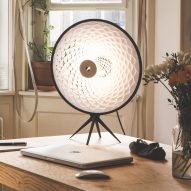 Noguchi's Akari collection has inspired many designers over the years, including Swiss designer Jona Messerli, who created a flat-pack table lamp with a lattice-patterned Japanese Shoji paper shade that was launched at IMM Cologne last year.