A skyscraper in Hawaii has become the latest to feature a vertigo-inducing swimming pool, allowing brave swimmers to look down through its transparent base.

The glass-bottomed pool extends out from the seventh floor of the Anaha complex in Honolulu, designed by Chicago-based studio Solomon Cordwell Buenz (SCB) in collaboration with local firm Benjamin Woo Architects. San Francisco-based Surfacedesign was responsible for the landscape design, including the swimming facilities.

Cantilevered 75 feet (23 metres) above the ground, the pool is the latest in a string of similar designs to be proposed or completed around the world. One can be found at a residential tower in Houston and another extends from a hotel in the Italian Alps, while plans are in place to build pools with glass bottoms in London and Surat, India.

The rest of the 38-storey Anaha tower features green-blue glass cladding, chosen to mimic the colours of the nearby Pacific Ocean. It comprises a stack of volumes with curving walls, offset from one another to look like waves, reaching 400 feet (122 metres) tall .

"The composition is reminiscent of the play between the crests and troughs of a calm ocean wave," said a statement about the project. "And like a wave, the reflection of light off the facade will constantly alter as the viewpoint and environmental conditions change."

For those not brave enough for the pool, other amenities are spread over an acre of space indoors and out, including a restaurant serving local cuisine.

The building also boasts Hawaii's largest living wall, which covers a surface 80 feet (24 metres) wide by 15 feet (4.6 metres) tall in the grand lobby and contains over 8,000 species of tropical plants.

A total of 318 residences are contained within the complex, with 244 studios, one-, two- and three-bedroom homes in the tower, along with 73 low-rise flats and townhouses.

It forms part of the wider Ward Village development of shops, restaurants, entertainment venues and public spaces in central Honolulu – the largest city on the Hawaiian island chain, located on the southern shore of Oahu. 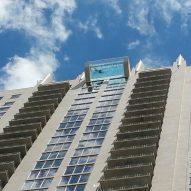