This extension to an historic villa in the Swiss town of Arlesheim by Basel-based studio HHF Architects features an expressed steel frame intended to provide a contemporary counterpoint to the house's traditional architecture.

The original villa was designed by Swiss architect Hans Bernoulli and completed in 1913. When its current owners bought it in 2013, it was divided up into two tiny flats.

HHF Architects was tasked with reconfiguring the existing interior and extending the compact building to create spaces suitable for a family with two young boys, while retaining the character of Bernoulli's design.

The refurbishment process focused on restoring original features such as a wooden staircase and joinery, as well as introducing improved communal areas, including a larger kitchen and a family bathroom.

The architects also added a double-height garden pavilion that increases the villa's internal floor area and provides a practical outdoor space with views of the garden.

"We wanted to extend the rather claustrophobic floor plan, both on the ground floor and first floor, with at least one big space which has a strong relation to the beautiful trees and garden surrounding the old building," architect Simon Frommenwiler told Dezeen.

The lower level of the pavilion in slightly sunken into the terrain at the rear of the house and accommodates an open room with a panoramic window facing onto the garden.

A short flight of steps leads down into the room, which is currently used as a music rehearsal space. Its uncovered concrete floor and muted palette of white and grey focuses attention on the greenery outside.

The upper terrace is described by the studio as "an open garden room". It is accessible through a glazed door on the first floor and provides a decked space for outdoor dining or entertaining.

The new addition is constructed from steel beams bolted together. This framework is left exposed to purposefully contrast with the villa's traditional exterior.

"We searched for a pragmatic solution to add a pavilion-like addition to the existing building," added Frommenwiler.

"The explicitly shown steel structure is an aesthetically pleasing counterpoint and works simultaneously as supporting substructure."

The framework extends up and around the top of the terrace, creating a form that recalls a pergola.

Metal mesh is used to form a balustrade, and will eventually be covered with climbing plants to enhance the connection between the pavilion and the garden.

Photography is by Maris Mezulis. 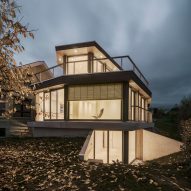