One of American architect Richard Meier's earliest projects, the Smith House, is portrayed in a fresh set of images by photographer Mike Schwartz to commemorate the influential project's 50th anniversary.

Located in the town of Darien, Connecticut, the house is situated on a wooded site that overlooks the Long Island Sound. Completed in 1967, the residence was built for Fred and Carole Smith, and today is owned by their sons, Chuck and Hobie Smith.

"I was working out of one room of a two-room apartment shortly after leaving the office of Marcel Breuer, and one day I had a call from Carole Smith asking if I would be interested in designing a weekend house for her family," said Meier. "She was looking for a young architect who would give full attention to the house."

The home is credited for propelling the career of Meier, who is well known for his geometric designs and pairing of white and glass surfaces. He won the Pritzker Prize in 1984, and was a chief figure in America's modernist movement in the 1960s and beyond.

"The Smith House catapulted Richard's career as an architect, and it was the project that helped to define Richard Meier's architectural language and the design philosophy of the firm," said his studio, Richard Meier & Partners Architects, which has offices in New York and Los Angeles.

"The house also revolutionised residential design in the United States and around the world."

In honour of the home's 50th anniversary in 2017, the Smith family collaborated with architectural photographer Mike Schwartz to capture the building in a new set of images. Shot last October, the photographs show the all-white home on its waterfront perch, surrounded by robust trees and a verdant lawn.

Interior images reveal updated decor that honours the original design. In one image, Chuck Smith – a documentary filmmaker and author – is shown standing on the second level, looking through floor-to-ceiling glass.

Smith said he vividly recalls staying at the house during his childhood.

"I can't believe it's been 50 years since I first experienced the Smith House," he said. "I was only five years old then, but the childlike wonder I felt then comes back to me every time I walk up the ramp, inside the door, and feel Richard Meier's design."

The facades reflect the home's interior organisation, which is divided between public and private zones.

Situated on a sloped site measuring 1.5 acres (0.6 hectares), the dwelling has an unassuming street-facing elevation, with small windows punched into a relatively opaque facade. Behind this wall are a series of "closed, cellular spaces" serving as bedrooms.

The solid front elevation belies the transparency in the back, where vast sheets of glass are set within a restrained number of white mullions.

"The dramatic view of sea and sky that greets one upon entering is framed and intensified in the transparent skin of the rear facade," the studio said.

A white-painted brick chimney runs up the back facade and rises far above the roof. The new photographs show chipped paint on the chimney, giving the home a slight patina. The composition of elements in the rear is meant to convey a sense of tension.

"Suspended between the chimney and the steel structural columns, the glazed wall creates a subtle tension that draws the occupant across the living space to the outside," the studio said. "The balustrades of the lower and upper levels are set back from the glass, amplifying that tension.”

Given its atypical design, the house garnered significant attention when it was completed. A September 1968 article in the magazine House Beautiful referred to the dwelling as a "lighthouse on the shore".

"People became very anxious to see it," Meier told Dezeen. "In the 1960s, design in America was more conventional and this house was much more modern, open, transparent and inviting."

One of Meier's favourite aspects of the house is the extreme precision that is represented in both its design and construction.

"I remember having a long conversation with the contractor when he was laying down the house according to our drawings, and he kept saying that he was missing one-eighth of an inch," said the architect. "At the end of the process, he was never able to find that one-eighth of an inch."

Meier added that his longstanding relationship with the Smith family makes this project particularly meaningful.

"My relationship with the clients at the time, and the fact that they have welcomed visitors and maintained the house in such an extraordinary way, make the Smith House very special," he said.

The project has won numerous honours, including the AIA's Twenty-five Year Award, which recognises groundbreaking projects that have stood the test of time. The family intends to care for the home long into the future.

"Maybe I'm biased, but I think it's a near-perfect work of art, and my goal is to preserve it forever and hopefully share it with all someday," said Chuck Smith.

Meier has developed an extensive global portfolio during his long career, which spans more than six decades. Other residences by the architect include the Douglas House, which was built in 1973 on a perch above Lake Michigan. In 2016, the home was added to America's National Register of Historic Places. 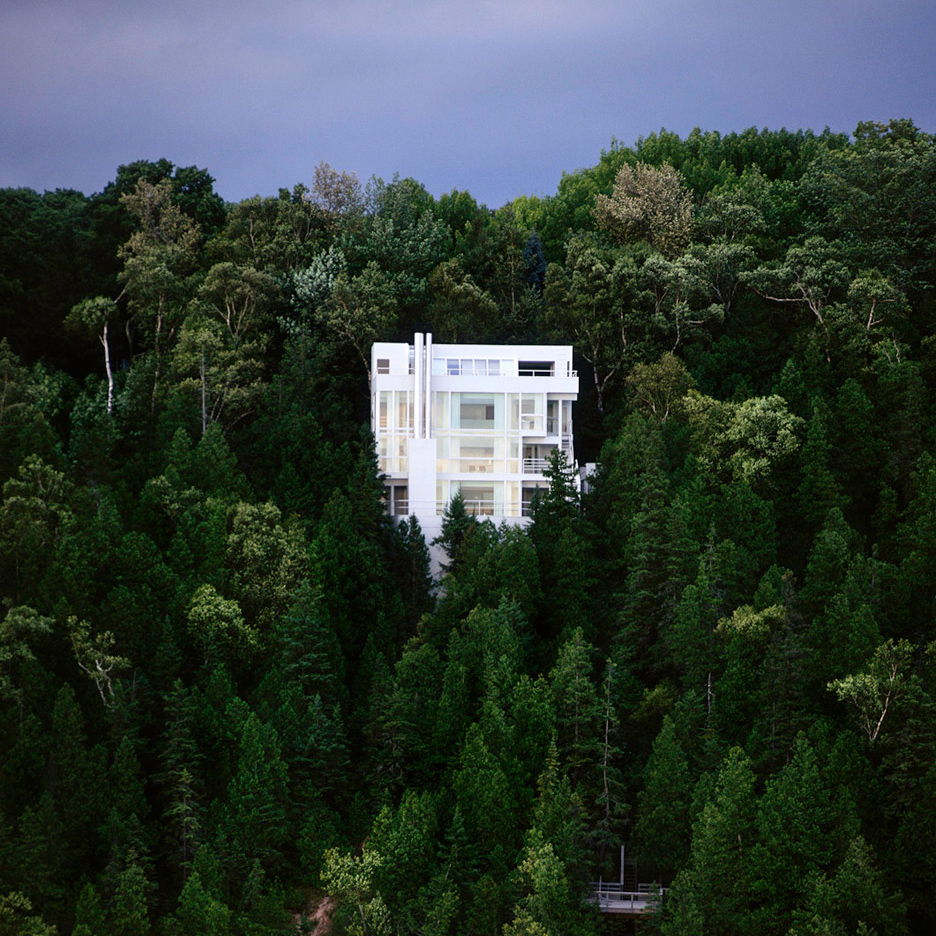