The memorial incorporates more than 23,000 commemorative bricks, each engraved with the name of a soldier and the date of their death.

Creating a "wall of names", the bricks form a 250-metre long corridor that spirals around a central commemoration hall.

"The idea of the personal memorial brick was thought of at an early stage of the design to become the material that builds the space," Etan Kimmel, co-founder of Kimmel Eshkolot Architects, told Dezeen.

An undulating funnel of concrete bricks is placed above to create a space for mediation. Natural light passes into this roofless space and filtered though the brick formation, so that no artificial light is needed in the memorial during daylight hours.

"The special shape of the funnel is like a vortex – a natural phenomenon – playing with the day light falling into the hall, making the day light a 'building material'," said Kimmel.

With the memorial set alongside a busy street in Jerusalem, the architects decided to excavate the building into the mountain to create a "secluded space of contemplation away from the daily noisy city".

Designed by the architects as an interior-first project, the building is intended to be unimposing from the exterior.

The memorial space appears as a stone continuation of the topography of the mountain creating a subtle landmark at the entrance to the cemetery.

Each of the building's 23,000 memorial bricks is manufactured from a local stone panel fixed onto a standard brick.

A computerised system, custom built for the memorial, illuminates each brick on the anniversary of the soldier's passing.

The form of the funnel was created in collaboration with the digital fabrication research team of ROB Technologies a spin off from the Swiss Institute of Technology (ETH), Zurich.

The irregular-shaped funnel is constructed from 9,000 concrete bricks, each created with a CNC routed aluminium core.

Commissioned by Israel's Department of Families, Commemoration and Heritage the memorial hall was built at the Mount Herzl National Military Cemetery.

The project is one of 68 buildings around the world that have been shortlisted for the 2018 RIBA International Prize for world's best building. 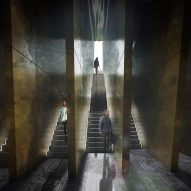