This installation by British artist Antony McCall invites visitors to walk through planes of light that create illuminated shapes on walls inside the David Chipperfield-designed Hepworth Wakefield gallery.

Three new "solid light" installations by  McCall are being shown for the first time in the UK as part of a show titled Solid Light Works –  marking the first time in a decade that the artist has had a major exhibition in his home country.

The artworks use digital projectors to beam precise shapes onto surfaces that are carefully positioned around the exhibition space. The beams of light pass through an artificial mist, creating the impression of sculptural forms suspended in the air.

Visitors entering the space are able to walk through the illuminated haze and interact with the circles, straight lines and waves that are the basic elements used by McCall in most of his light installations.

The projections shift and mutate as they cycle slowly through a series of sequences that are programmed to repeat over the course of the day.

The artist said the slightly irregular spaces within the Hepworth Wakefield gallery, which architect David Chipperfield designed as a grouping of trapezoidal blocks, are well-suited to presenting his installations.

"I am thrilled to be showing in the UK and particularly in the David Chipperfield-designed galleries at The Hepworth Wakefield," said McCall. "These carefully proportioned and gently angled spaces are unusually sympathetic to the work on display."

The exhibition also presents a collection of McCall's notebooks, which he uses to sketch initial ideas and develop the two-dimensional and three-dimensional aspects of his work.

McCall began creating installations with light shortly after moving to New York in 1973. He describes his works as existing in the space where cinema, sculpture and drawing overlap.

His earliest light works used film projectors to trace lines of light onto walls. Examples such as Line Describing a Cone were displayed in lofts where dust and cigarette smoke would allow the beam to be seen creating a three-dimensional shape.

When he was invited to exhibit in museums and gallery spaces, McCall discovered that the impact of the works was diminished as the air was too clean for the beam to be visible.

Having stepped away from making art to establish a graphic design studio in the late 1970s, he returned to his artistic practice in the 2000s, by which time the development of the haze machine made it possible to create work in a controlled environment.

Digital projection has also allowed McCall to realise more ambitious works, which continue to combine the same linear elements to create the illusion of three-dimensional ellipses, waves and flat planes within the gallery space.

Solid Light Works is on show at The Hepworth Wakefield gallery in Yorkshire until 3 June 2018.

Last year, the gallery hosted an exhibition curated by fashion designer Jonathan Anderson, which explored the way artists depict the human form through their work. 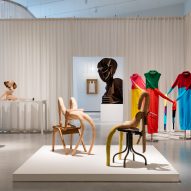