Taking its name from the Farsi word for concrete, the Siman collection was born from an image on a postcard of the 12th-century Toghrul tower, situated near Tehran, Iran.

With this architectural style in mind, Venier focused the collection on the idea of "building up a functional landscape," designing the series to collectively look like ancient ruins or an archaeological site.

"The seven pieces carry a strong architectural character and act as little structures populating interior landscapes, with a highly graphic and timeless personality," said the designer.

Venier often combines his background in architecture with his keen interests in history and travel as starting points for his work.

This initial reference, be it a piece of architecture, design, or a material texture, is then "hacked" and "diverted" in order to develop a new narrative, he told Dezeen.

Made up of a cake stand, candle-holders, dishes and a vase, the main feature of each item in the Siman collection is its pleated surface, which, according to the studio, creates an "ever-changing game of shadows and depths."

In addition to each piece being made from concrete, Venier tried to emulate the poor preservation of the Toghrul tower by leaving each object without any surface finishing or polishing.

He then sends these 3D illustrations to the Brignetti Longoni design studio in Milan, which specialises in 3D printing, where they are made into objects using HIPS (High Impact Polystyrene).

The objects are then sent to Urbi Et Orbi – a specialist concrete studio in Greece – where they are used to create silicone moulds that are finally used to cast the concrete pieces.

The studio describes the collection as a mix of tradition and innovation, incorporating both age-old clay moulding techniques and modern 3D printing.

"We like the fact that the design process started from the very humble and ancient material and technique of clay moulding, to then go through a highly technological phase with the use of 3D computing and 3D printing, to end up as a collection that is made from a very rough and old material – concrete – which was used in ancient Rome as a building material," said Venier's studio.

Available in two shades – light grey and anthracite – the Siman collection will be officially launched at this year's Salone del Mobile furniture fair in Milan, which takes place from 17 until 22 April.

The collection features a similar design aesthetic to Phil Cuttance's handmade chevron-textured objects, which are handmade from Jesmonite – a composite material that combines plaster and cement with water-based resin. 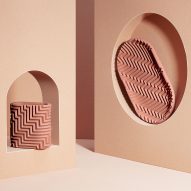 Photography is by Olivier Lacrouts.