A glazed atrium will be used to expose the sloped roof of a multi-purpose arena in Seattle, as part of architectural firm Populous' plans to update the 1960s structure.

Populous is teaming with stadium design and development specialists Oak View Group (OVG) on the $600-million (£432 million) transformation of the venue, which is located in the Seattle Center entertainment complex and known as the Keyarena.

The proposal aims to subtly adapt the structure that modernist American architect Paul Thiry designed as the Washington State Pavilion for the 1962 World's Fair – comprising a curved roof that rests on chunky, triangular feet, and awarded landmark status last year.

A glazed volume will be built along one side to offer views of the roof structure on approach. Inside, it will create space for the main circulation, including a series of escalators.

The rest of the interior will be reconfigured to provide more space to host larger crowds for sports games, ice shows, circuses and music concerts. The stadium currently hosts 17,072 for basketball and 15,177 for ice hockey games and ice shows, with similar numbers for performances and boxing matches.

"The extensive renovation aims to reposition the venue as the premier sports and entertainment destination in the northwest," said Populous in a statement.

"The design creates a stronger connection between the arena and the surrounding Seattle community through its extensive use of glass and features a completely redesigned interior with new clubs and social spaces, all while preserving the landmark history of the site."

New images of the proposal also reveal the design for a "premium space" on the first floor, with a glass roof that offers visitors view to Seattle iconic Space Needle. The area will be named the Space Needle Club after the observation tower, which was also built for the World's Fair and is currently being renovated by architecture firm Olson Kundig.

Other modifications to the arena will include a new public plaza to be created on the southern side, along Thomas Street, and accessed from the building by steps.

Expected to commence in 2020, the project is latest in a slew for stadium specialists Populous, which recently announced plans to build spherical music and entertainment venues for the Madison Square Garden Company in Las Vegas and London.

The firm is also masterplanning a development for the 2024 Olympic Games in Paris and a soccer stadium in Miami for David Beckham. 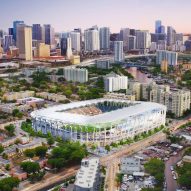