Bernardo Bader Architects has reinterpreted the traditional Alpine chalet using concrete and larch wood to create a home for an art and antique furniture collector on the edge of a village in the Appenzell region of the Swiss Alps.

The Austrian practice was commissioned to create the house on the site of a farmhouse that had been partially destroyed by a fire in 2011.

Called House on the Schopfacker after the name of the road leading into the Alpine village of Trogen, the rectangular-planned residence is raised on a large stone plinth and clad in pale Siberian larch wood.

"Coming from the village of Heiden, the building reads as 'the first house of Trogen' and makes a self-assured start to the dense, towering settlement with its traditionally narrow lanes," said the architects.

"The new house grows out of the tradition of a historical order, which characterise many townscapes in Appenzell. The architectural design language takes on a clear reference to traditional, upper middle-class living in the Appenzell region."

Buildings typologies in Trogen fall broadly into two categories, square timber-framed houses and historic stone palaces that were built by a family of wealthy linen merchants in the village during the 16th century, when the area became rich from the weaving and embroidery trade.

With it's grand proportions and combination of wood on stone-grey concrete, House on the Schopfacker marries the two styles of its location with a modern inflection.

In the Vorarlberg region of Austria the architects designed a larch-clad house raised on stilts that references the Walser farmhouses of the area and has wraparound views of the valley below.

For an Austrian chalet they covered the exterior in pine and spruce sourced from the nearby slopes and punctured the facade with windows at all levels.

The interior floors, walls and ceilings have been clad in wooden ash boards. The cast-concrete framework is left bare for the aesthetic effect in certain areas, including an accent wall in the open plan living area.

Concrete walls also feature in the hallway and in the stairwell, which features a single minimalist ash-wood bannister. A bathroom features a bare concrete ceiling, with the grey mirrored in the terrazzo floor and grey tiled walls.

The topmost level of the house features an open plan L-shaped kitchen, living and dining area under the vaulted roof, where the kitchen units and island have been clad in matching ash boards.

Sliding glass door lead out to a covered terrace, which has been fully glazed on three sides with a glass balustrade on the fourth side, giving unobostructed views of the surrounding scenery.

Contemporary furniture such as glass tables and metal and leather chairs contrast with the owner's eclectic collection of antique furniture and art, including a grand carved wooden four poster bed. 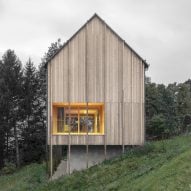 Recent unusual residential projects in the Swiss Alps also include a timber-framed house-cum-art-installation with undulated walls painted pink and green in the Calanca Valley, and a bunker-like cast concrete house set into a hillside in the town of Savièse.