Male characters featured in the Monopoly, Pringles and Dreamworks logos have been swapped for women by organisation Creative Equals, as a way of tackling "unconscious bias" in the media.

The organisation, which aims to promote diversity in the creative industries, wanted the visual campaign to imagine the world "through an equal lens".

It profiled a range of logos from some of the world's leading brands, including Pringles, Monopoly and Dreamworks, and swapped their leading male figures for women.

The intention was not only to shed light on unbalanced branding but to also question the diversity of the work's creators.

"Unconscious bias is such a big topic in the media at the moment, but we realised a number of logos and mascots seemed to show male figures, and no-one seems to have noticed," Creative Equals CEO and founder Ali Hanan told Dezeen.

Through subtle changes, the graphics are merged from male to female: the Pringles mascot loses his moustache, the Dreamworks child takes on a female form, and the logo for Bic pens grows two pigtails. 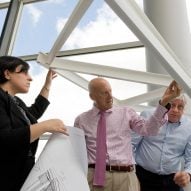 "We looked at hundreds of loved and well-known brands across the world, and whilst there were a number of instances where women appear in logos, there were definitely a lot more males across the board," Hanan said.

"We're not attacking any of these brands personally of course, but we wanted to show a variety of examples to get people celebrating IWD and thinking about the need for more women."

Dezeen also launched an initiative to improve gender equality in architecture and design this week, to coincide with International Women's Day. We are calling on readers everywhere to help us Move the Needle.

Foster + Partners became the first major global architecture studio to commit to taking action on gender diversity, after the architecture firm – which is the 14th largest in the world and employs around 1,500 staff – revealed a gender pay gap in its staff salaries.