William Tozer Associates has completed an extension to a house in Auckland, comprising a series of blocks clad in wooden shingles and vertical boards that enhance the connection with various gardens and decked terraces.

The Victorian villa in the New Zealand city's Mount Eden suburb is now loosely enclosed by the cluster of pavilions, which increase its total floor area to 345 square metres.

The new additions are designed to reference the scale, proportions and materiality of the existing house, while their simple, clean-lined forms mark them out as modern interventions.

"The pavilions are articulated as autonomous rectilinear sculptural volumes, but in turn frame views back to the villa, refocusing attention on its form and details," said the studio, which is headquartered in London but also has offices in Australia, New Zealand and the USA.

The new spaces include a garage situated towards the front of the villa, and a rear extension accommodating an open-plan lounge, kitchen and dining space.

The main living area is connected to a single-storey wing accommodating a room that can be used as an additional lounge or games room. 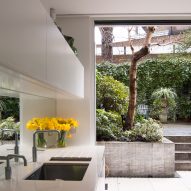 "The open-plan spaces of the interior are loosely divided into zones of use by rectilinear volumes and planes, changes of level, and skylights," said the architects.

A staircase slotted in between the new rooms at the rear of the house ascends to a master bedroom suite with a balcony overlooking the garden.

The new structures are predominantly clad in wooden shingles and vertical slats, which were chosen to reference the use of similar materials on parts of the original villa.

The limited material palette gives the extensions a unified aesthetic and provides a warm and natural contrast to sections of white-rendered walls and glazing.

The dining area and kitchen is lined with sliding glazed doors that open onto a decked patio, while a space between the new games room and garage at the side of the house contains a smaller deck and lawn.

The dimensions of the outdoor spaces and their positioning between the new buildings are intended to lend them a domestic scale, as if they are additional rooms connected to the rest of the interior.

"This approach is informed by the practice's many years of experience working on terraced and semi-detached housing in London," said the studio, "where tight space constraints mean that courtyards are the full extent of many clients' outdoor space."

The need to consider the outdoor areas as extensions of the architectural spaces also influenced the design of the swimming pool and surrounding landscaping.

William Tozer Associates applied similar principles to a refurbished Victorian house in London that opens onto a compact courtyard garden, while its renovation of another London property involved introducing integrated storage elements to separate some of the spaces.

Photography is by Carme Aguayo.