A photography book by Mary Gaudin and Matthew Arnold reveals how the Christchurch Style movement produced an array of distinctive modernist houses in the New Zealand city in the 1960s.

I never met a straight line I didn't like features images by photographer Gaudin and text by Arnold, who is co-founder of design agency Sons & Co. It showcases 12 well-preserved examples of homes built in the Christchurch Style.

Adapted from a Danish housing model, these properties explored building materials and techniques that were highly radical in their context.

"There's a running joke that someone in 1950s Christchurch owned a book of contemporary Danish homes, and that denied all contact with the wider world, local architects set about endlessly recreating them with the limited materials they had to hand," Arnold told Dezeen.

"In turn, they accidentally created one of the few original and lasting cultural movements in New Zealand's modern history."

The project builds on a previous book by Gaudin and Arnold, Down the long driveway, you'll see it, which looked at midcentury homes from all across the country.

This time around the pair chose to focus specifically on Christchurch, believing this small conservative city to have been an epicentre of architectural creativity at this point in history.

France-based Gaudin grew up in the city, while Arnold is based close by, so Christchurch Style is something they are both familiar with, yet the movement has not been widely written about in architectural history.

Five of the projects are by well-known firm Warren & Mahoney, one of the main pioneers of the Christchurch Style.

Its projects, which include the JH Elworthy House (1969) and HR Irving House (1968), explored the potential of the concrete block in residential architecture. 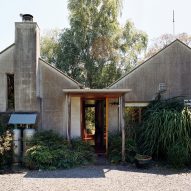 Other highlights include the G Steven Beaven House by Hunt & Associates (1967), which Arnold describes as a "modernist's Toad Hall", and the PNG Blaxall House by Griffiths & Moffat (1967), which Gaudin says is "brimming with quiet drama".

"Rooms and spaces are revealed slowly and gently," she said. "The Japanese idea of water flowing through the house, dividing spaces, gives the house a mediative quality, whilst having the feeling of being firmly rooted in New Zealand."

What all these homes have in common, according to Arnold, is that even though they were luxury homes, they were built from very modest materials.

"It was all about the architecture, not the fittings," he said. "So in that respect, there's an economy and permanence to them."

"If you look at the Webb Flats, by Warren & Mahoney, they're affordable housing without design compromise," he continued. "They're perfectly formed, finished with simple, hard wearing 'tenant-resistant' materials and are still the local benchmark for the inner-city bachelor pad."

Only a limited number of Christchurch Style homes still exists, as many have been insensitively altered or demolished over time, while others were destroyed in the earthquakes of 2010 and 2011.

The authors hope that this book will help to shine a light on this particular style of architecture and encourage others to place greater value on it.