Complete with a single linden tree, the 20-square-metre floating platform is a prototype for a project called Copenhagen Islands. It was designed to be used as a public space.

"The prototype island has been used as a resting place for kayakers and swimmers, for sunbathing, fishing and for small events," Blecher told Dezeen.

"For example, later this month it will host a lecture series about the future of harbour cities."

The island was constructed by hand in a boat yard in the south of the harbour. It is intended as the first in a series of floating platforms that aim to add interest to waterways.

"It was developed to ​introduce life and activity to Copenhagen's rapidly developing harbour and to ​bring back some of the whimsy that has been lost in ​its development," said Blecher.

The ambition is for the platforms to combine and form a network, creating what the architects call a "parkipelago" in the harbour.

In total, Blecher and Maarbjerg have proposed nine islands, each with different functions. These include a diving board, a small stage, a sail-in cafe, a mussel farm and a sauna.

These islands will be designed so that they can be connected together for festivals or special events. 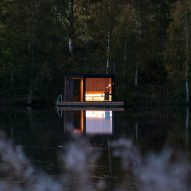 Blecher believes that the floating islands could be adapted for use in other cities as well as Copenhagen.

"My hometown of Sydney has an enormous and beautiful harbour, but it is dominated by waterside mansions and rows of underused white yachts," he said.

"Projects like this could help democratise harbours and bring some life back onto the water."

Copenhagen's waterfront has been rapidly developed in recent years.

For instance, Danish firms COBE and Vilhelm Lauritzen Architects built three apartment blocks with faceted rooflines and brick surfaces on the harbourside, while American architect Steven Holl has received permission to build two towers connected by a cycle bridge at the entrance to the dock.

Copenhagen Islands is the latest in a series of landscape proposals.

The first stage of the project was funded by the Danish arts fund (Statenskunstfond) and Havnekulturpuljen, an organisation that promotes and cultural activities within the harbour. Blecher and Maarbjerg are working with the Danish arts fund and other not-for profit groups to fund the next stage of development.

The island is currently located in Copenhagen's Slusen, but will be moving north to Refshaleøen in the spring.