This new headquarters for fashion brand COS features a facade of iridescent green tiles, added by London studio Orms to realise the intention of the original architect.

Orms renovated a nine-storey triangular shaped building in central London, at the junction of New Oxford Street and High Holborn, to be COS's new European headquarters.

The architects discovered that, at the time of construction, these tiles were not favoured by Giles Gilbert Scott, who was advisor to the crown and had influence over the final design.

"We found an article in a magazine which outlined the architect's original intent to provide green glazed tiles," John McRae, co-founder of Orms told Dezeen.

"We then found letters between the architect and Giles Gilbert Scott, which outline alternative finishes and Scott's preference to have a Portland stone base, and precast concrete panelling on the prow and cores of the building."

Glazed tiles have appeared on several buildings in London in recent years. EPR used 1,000 hand glazed ceramic tiles to clad the exterior of an office in Saville Row, while Assemble covered a London Underground station with handmade tiles.

McRae believes that Lafontaine would approve of this latest addition. "I believe Lafontaine would raise a smile at our audacity to reintroduce the green glazed tiles to create an appropriate gateway to the West End," he said.

As the building sits at a major junction, the tiles also enhance the office's role as the landmark at the beginning of the West End – an area of the city containing many major tourist attractions.

"We felt that the prow of the building had to offer more to the city, as it is on the junction of High Holborn and New Oxford Street," explains McRae. 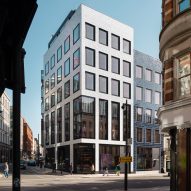 "One way of achieving this was to replace the pre-cast concrete with green glazed tiles that would offer colour, but also reflections of the surrounding buildings and sky. The tiles appear to change colour depending on the daylight, sunlight and sky, which makes it more dynamic and provides an element of surprise."

Internally, the renovation has taken many references form the original art-deco building. It aims to meet the architects original intentions of creating ideal surroundings with an abundance of daylight and air.

The central courtyard has been turned into a full-height glazed atrium, with a double-height reception area at its base.

"Our aim was to create more open, flexible workspaces, where the courtyard becomes an atrium and means you can view the entire floor from any corner of the building," continues McRae.

On the building's street facades, retail units are placed behind curved glazing between the original Portland Stone piers.

COS has already moved into the building. The interior's of the COS offices were designed by London-based studio Maris Interiors.

The brand, which was the highest-ranking fashion name on Dezeen Hot List 2017, is now working with its in-house design team to personalise the interior.