Skidmore Owings and Merrill has proposed a 180-metre skyscraper in Paris that is designed to be zero-energy, and accessible via a garden bridge leading from the River Seine.

The international architecture firm is part of the team that launched a masterplan for the Charenton-Bercy project at property event MIPIM in Cannes this week.

The new tall building will include a mixture of private residential apartments and hotel rooms. Informed by Parisian townhouse typology, each 1.5-storey, loft-style apartment will be entered from the building core via a front garden overlooked by balconies.

"As part of a wider environmental strategy, the tower at Charenton-Bercy will become one of the most sustainable buildings in Europe," said Yasemin Kologlu, associate director at SOM. Sustainable design elements will include rainwater harvesting, greywater recycling, and waste-to-energy conversion.

The architecture firm hopes that, once complete, the district will be one of the first projects to be accredited in the WELL Community Standard pilot scheme, which seeks to recognise health-focused and well-integrated communities.

Renders of the Charenton-Bercy tower show the "gardens in the sky" running down the sides of the tower in green bands, linking with a tree-filled plaza at the base of the tower filled with shops and open-air cafes. 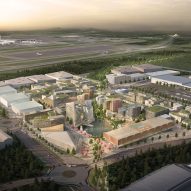 A third of the site will be given over to green space, with another third filled by buildings with green roofs. The developer has committed to planting one tree on site per residential unit.

Of the 1,000 residential units promised in the masterplan, 30 per cent will be social housing. As part of an integration plan, 42,000-square metres will be given over to co-living units for students and seniors.

"In scripting the overall masterplan, we saw our role as bringing a fresh perspective from an international point of view, refined in close collaboration with our local team to ensure a sensitive integration within the existing community," said Daniel Ringelstein, director at SOM London.

A new high street will bring 43,000 square metres of retail and leisure space, and a primary school, public pool, and fitness centre will serve current and future residents of the area. Up to 167,000 square metres of office space will be built, and the master-planners predict the creation of 15,000 local jobs.

Three new circulation routes fan out at the base of the tower from a single thoroughfare leading from the river, where a landscaped garden bridge will stretch over the existing railway tracks.

"In addition to this, a landscaped garden bridge over active railway tracks connects people in the local area from the Bois de Vincennes to the River Seine." 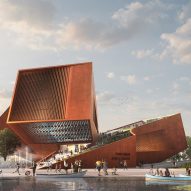 A timber-framed rotunda is planned between the tower and the bridge. Called Neo, the circular building will have an interactive LED facade and is due to become a "digital hub" for eastern Paris. The space will host studios and co-working spaces for virtual reality, augmented reality, CGI, animation and video game developers.

Neo's 360-degree frame will rise on two sides to create a courtyard and public through-way to the river. Both the aquatic and fitness centre at ground level, and the rooftop gardens, will have views out over the Seine.

The project is one of 52 backed by the French government to connect the inner city with its suburbs. Other developments planned for Paris include a UNStudio-designed cinema and cultural centre as part of the EuropaCity development in the northern suburbs of Paris.

Renzo Piano's 160-metre-high tiered skyscraper housing the Tribunal de Paris recently completed in northern Paris, and will be the "largest law complex in Europe" when it opens in April 2018.