Norwegian designers will present a range of new products, sculptural craftwork and iconic designs during this year's Milan design week.

Norwegian Presence returns to Milan design week this year, with a show taking place in the Tortona district from 17 to 22 April 2018.

Hosted by a trio of independent and government-funded groups – Klubben, Norwegian Crafts and Design and Architecture Norway – the exhibition will explore "the making of modern Norway". As with previous years, it will present some of the country's best established and emerging design talents.

This year's presentation focuses on the importance of collaboration, or what Norwegians call "fellesskap". It will also showcase the country's skills in both craft and technology – and how the two can be fused together.

"This feeling of fellesskap or togetherness is an important driving force and motivation. This exhibition, like the Norwegian design industry as a whole, is all about sharing and lifting each other up to make something happen."

A range of furniture, textiles, lighting and sculpture pieces will all be on show, split up into three sections: design, craft/sculpture and manufacture. 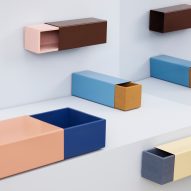 Here, prototypes will be shown alongside finished products, all of which the curators felt are "products to enrich homes and enhance lives".

The craft area includes the likes of Lillian Tørlen, Pearla Pigao, Stian Korntved Ruud and Sigve Knutson – who had his own show in the 5vie district at last year's festival.

These designers were chosen for their ability to "blend ancient making traditions with new technologies". Their works will show how craft-like aesthetics can be created through modern processes.

The final area, named manufacture, will present some of Norway's most successful and iconic design objects, which have helped the country to gain its reputation.

Elementa – established in 2012 – works with designers to create office furniture and will present its UN Divided System by Jonas Stokke and Øystein Austad.

Family-owned Vestre, which creates sustainable furniture for public spaces, will bring along its Atlas Bench, while Northern will show its Loud cabinet by Färg & Blanche, launched during this year's Stockholm Furniture Fair.

New brand Objekt will launch at the show, with a tubular steel chair named Grorudstolen by Hans Brattrud.

Finally, Gudbrandsdalens Uldvarefabrik will present a range of its fabrics.

"You will meet manufacturers who have been making things for over a century, as well as bold new design brands presenting their very first collections," said the organisers. "You will encounter things that are beautiful and intriguing, practical and playful."

"Above all, you will gain an insight into the tremendous diversity of Norwegian making and the common thread that runs through it: in Norway, nothing is made alone," they continued.

Last year's show explored the journey from maker to market in Norway, while 2015's showed over 50 products from 46 Norwegian designers and artisans – ranging from contemporary prototypes to 1940s furniture.

Photography is by Lasse Fløde.