Gabled buildings wrapped in aged wood form this vineyard home, which Field Architecture designed to make the most of its setting above Napa Valley.

The project, Sentinel Ridge, is located on Howell Mountain, which rises above the famed California wine valley. The residence was designed for a couple wanting a serene refuge from their home in the American Midwest suburbs.

Creating a building that embraced the picturesque scenery was a leading concern for the design team.

"The particularities of the site – the slender plateau that overlooks the valley, the subterranean rock formation along the brow of this plateau, the juxtaposition of forest and vineyard – inspired a careful weaving of form that highlights the landscape," said Field Architecture, a studio based in Palo Alto, California, which worked on the project with interior designer Erin Martin.

The home consists of a trio of gabled-roof volumes that are laid out on an east-west axis. Exterior walls are clad in reclaimed Douglas fir, with vertical lines that direct the eye toward the pitched roofs made of standing-seam metal.

Taking cues from the colour of soil, tan stucco was also used for certain portions of the facades.

The timber-framed volumes rest atop a low plinth, which serves as a connective element.

"This plinth, the connective tissue of the house, links all three volumes to each other and then subsequently to the land, as shallow steps lead down from it onto the soft edge of the cliff that outlines the valley below," said the architects.

An exterior colonnade made of wood and steel is meant to weave everything together.

"Making its way through the volumes, the colonnade becomes an outdoor room and eventually leads into the central volume of the house through a tall opening that reaches the roofline, its slender length reflecting that of the evergreens that surround the house," the team said.

The central volume contains an expansive dining space, where two large, sliding doors can be opened up, providing a powerful connection to the surrounding vineyard and forest. A centrepiece of the room is a dining table made of repurposed materials: reclaimed oak and an old steel carriage. 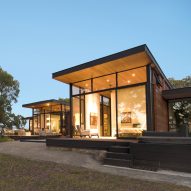 "The table can slide along curved tracks that are cast into the concrete floor, and can function as a dining table or a tasting table for the adjacent wine cellar," the team said.

A spiral staircase leads to a mezzanine, where a space called "the perch" serves as a management office for the property's vineyard.

The home's west wing contains a living room, kitchen and master suite, while the volume on the east encompasses several bedrooms. Sliding glass doors help minimise the distinction between inside and out.

Similar to the facades, the team used salvaged Douglas fir inside the home. Horizontal boards wrap ceilings and walls, lending a "sense of calm groundedness" to the space.

The material choices were influenced by Field Architecture's view of sustainability as a critical component in the design and building process.

"The way the materials came together was just as important as how they were made, from where they were sourced, and how long it took to get them to their future home," the team said.

The materials also help connect the dwelling to its natural setting.

"The home's overall effect – a careful and studied blending of interior and exterior – always manages to bring the attention back to the perfection of the land outside," said the studio, which has also recently completed a spacious home on a wooded site near San Francisco.