US supermarket giant Walmart is seeking to patent technology that would see drones pollinate crops like bees.

The patent application, filed with the United States earlier this month, reveals that the company is looking to revolutionise farming processes with the use of robotic alternatives to bees.

The document outlines plans for a system of "one or more unmanned aerial vehicles" (UAVs), which would use cameras and sensors to find the locations of crops, then use an applicator tool to move pollen between them.

Drone bees could have up to eight rotary wings

According to the text, drones would likely take the form of a multicopter – a type of aerial vehicle that flies using two or more rotating blades. Walmart sees its UAVs using as many of eight of these rotary wings.

The drones would be controlled via a centralised computer system, with a list of available programme options, depending on the crops in question. They could also operate both by day and at night. 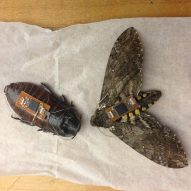 Swarms of cyborg insects could be used to map dangerous environments

Other potential features include radars used for detecting obstacles, sensors for measuring wind speed and direction, wheels that allow movement on the ground and sails to allow movement on water or wet surfaces.

The patent was one of six filed by Walmart, including several focused on automating agricultural processes. The supermarket chain also plans to use drones for spraying pesticides and monitoring crop conditions.

However artificial pollination has the bigger potential to significantly affect the company's business.

According to research by Greenpeace, pollination by bees contributes $265 billion to the global economy. So, with the world's bee population now in major decline, robotic alternatives could prove necessary to meet the global demand for food production.

Walmart isn't the first to have invested in artificial-pollination technology. Brisbane-based artist Michael Candy recently unveiled his design for a device featuring 3D-printed robotic flowers, while a research lab in Japan recently became the first to successfully achieve pollination using a drone.

But one of the most radical proposals in the field comes from researchers from Nanyang Technological University in Singapore and the University of California Berkley. They suggest that drone technology could be used to turn beetles into remote-controlled cyborgs and, although they don't mention pollination, they suggest the technology could be used to perform a variety of tasks.