Creative agency Superimpose Studio has launched a series of anti-Brexit billboards across the UK, which feature playful imagery comparing the successful campaign to a disappointing burger.

Designed by Superimpose Studio's co-founder and creative director Ollie Olanipekun, the adverts feature imagery of a gourmet burger next to a flattened, cheaper-looking counterpart.

Bold black text reading "Swindled" is set against a yellow background, in reference to promises made by political figures campaigning for Leave during the EU referendum.

A call to action is also placed underneath in smaller font, telling readers "It's not too late to fix Brexit."

Images of burgers were used as a symbol of this political message, and are described by Olanipekun as showing "promise versus reality".

"I was in a room with the country's most critical and creative minds, discussing a campaign to galvanise the British public to take action. Even Leave voters feel as if they've been cheated and promised things that will never materialise," Olanipekun said.

"The idea of ordering a burger and not receiving what was expected is a feeling that everyone can relate to," he continued.

Olanipekun chose the colours based on the billboard's locations – most of which are installed near motorways.

"The yellow and black felt more of a necessity than a choice," he continued. "Historically it has been used on motorways as road warning signage to grab the attention of drivers at high speeds. Naturally, with our billboard in high traffic areas, it was an ideal fit."

The project began after Olanipekun was approached by Best for Britain, an anti-Brexit group founded by Gina Miller, to work with other British creatives and political figures on a campaign to galvanise the public politically.

However, the studio, who has previously run global campaigns for Adidas and Burberry, made the decision to take launch into their own hands – after Best for Britain stalled over key bureaucratic decisions surrounding the project.

"Creative differences aside, self-funding this independently allowed us to demonstrate that as a small agency able to achieve this, everyone has a role to play in our future," Olanipekun told Dezeen.

The billboards are located in London and on other busy roads and motorways in major cities including Leeds, Liverpool, Manchester and Birmingham – which was one of the largest areas to vote to leave the EU in June 2016.

Visitors to the Swindled website can download a graphic of the billboard to share online and find the contact details of local MPs, in case they wish to voice them about concerns over the EU referendum result. 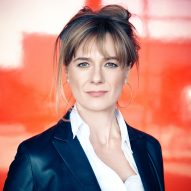 Despite such publicised concerns about Brexit, recent UCAS figures revealed UK universities have received more applications from EU art and design students in 2018, refuting fears that Brexit would lead to a fall in demand.