London nightclub Ministry of Sound is opening a Squire and Partners-designed co-working space and members' club with a bar at its centre to appeal to the "next generation of rebel creatives".

Named The Ministry the workspace and private members club is being built in a former 19th-century printing works near the iconic club in Elephant and Castle, south London.

The members' club, which has been designed by London-based studio Squire and Partners, is set to open in July 2018.

Ministry of Sound is making the move into the ever growing co-working sector as it believes the experience gained working with younger generations will allow the company to create a workspace that specifically caters for creatives.

"Now 27 years later, the desire is to use the knowledge gained over this time to create the perfect environment for the next generation of rebel creative businesses," he continued.

"Unlike other companies within this space, we actually understand how creative people work and what their environment needs to be like to maximise their chances of success."

The members club will contain a 20-metre-long bar that will span the entire entire ground floor and be the central meeting space in the building.

"We also understand that this is a very social industry, so at the heart of the building is a bar and restaurant," said Moore. "Far from this being just an add-on or afterthought tucked away in a corner that feels like a glorified staff canteen, we decided to create something with the aim of it measuring up against any other bar in London."

"This is the heart of our building, it's the space through which everyone passes on their way in and its aesthetic has informed the way the rest of the space looks."

There will also be an outdoor courtyard space, restaurant, 36-seat cinema, sound-proof production studios and an immersive technology studio.

The architects were instructed to design a workspace that incorporates the "premium raw" aesthetic of the Ministry of Sound club.

Ministry of Sound chose to work with Squire and Partners after seeing the practice's overhaul of a department store in Brixton to house their own offices, which has a similar aesthetic. 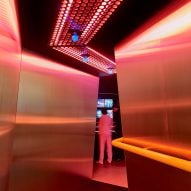 "Having seen their work on the Department Store we felt like Squire and Partners would be the perfect fit to help us realise this vision," explained Moore.

For the members' club this means that the printworks will be stripped-back to expose the original building's fabric, with simple furniture and plush textiles added to the interiors.

"The contrast of these two styles creates a powerful and distinctive aesthetic that's true to the parent brand's heritage but feels very contemporary, and is a world away from the sterile, claustrophobically-new feel of most working environments and the ubiquitous vintage-heavy look of members' clubs," said Moore.

Ministry of Sound's co-working space joins a growing number of shared workspaces built in London. Second Home's informal workspace in Shoreditch by SelgasCano was one of the earliest examples in 2014.

AvroKO recently transformed an art-deco building into a members' club and workspace in Fitzrovia, while Palmspace created a co-working studio in a former factory in Hackney.