Designed to "change the perception of the flow of time", the amorphic hourglasses feature different sized cavities and passages that alter the speed and the angle of the flow of the sand.

"An hourglass is a device that has been used since antiquity, and is still being used in our everyday lives, its shape barely changing over thousands of years," said Nendo.

"With the advent of digital clocks, the hourglass has transitioned from serving a functional role to convey more of a sentimental value, symbolising the idea of time," added the team.

"The concept of this collection could be said to be designing time itself."

Carved from a block of transparent acrylic, the interior cavity of each hourglasses has been polished by hand with fine metal needles tipped with abrasives.

The resulting fluid shapes are intended to give the impression that time is moving even more freely than it was before. 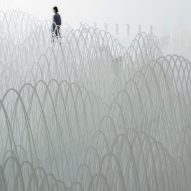 The series of four designs, titled Variations of Time, include Time Divided, which divides five-minutes-worth of sand between two cavities. Once two minutes-worth of the sand has accumulated in the left chamber, the sand starts falling into the right chamber, counting an additional three minutes.

In Time Converted, the angles of the chambers control the movement of the sand. One way up, the sand travels along a path on the right that takes two minutes. When flipped the other way, the sand is directed over to the left taking just one minute.

It takes the sand one minute to fall from the first chamber to the second of the Time Doubled design. Once the sand has drained from the second chamber into the third, two minutes have passed.

Times Three is made up of three puddle-like chambers that are open at the top. Depending into which chamber the sand is poured, the same amount of sand can count one, two or three minutes.

The hourglasses are not the first time-keeping devices designed by Nendo. In 2008, the studio created a two-metre high sculptural clock with outsized hands. In 2014 it created a wall clock that used drawings of seed heads on dandelion clocks instead of numerals, and at last year's Milan Design Week it presented a series of clocks made from slices of extruded acrylic.

Nendo will present Variations of Time at next month's Milan design week, as part of a solo exhibition titled Nendo: Forms of Movement.

The show will feature 10 different collaborations between Nendo and Japanese manufacturers, each one using unique materials and advanced techniques. As well as the final products, the exhibition will showcase the models and sketches used in the design process.

It takes place at Superstudio Più, on Via Tortona 27, between 17 and 21 of April.

Photography and film are by Akihiro Yoshida.