Architecture practice Tonkin Liu has designed an installation that uses the sun's rays to draw attention to historical events in Hull, England.

Titled Solar Gate, the 10 metre-high installation is situated in Hull's city centre at the entrance to the Queen's Gardens.

London-based practice Tonkin Liu were selected to create the structure following a competition held by Hull's council to compose a public artwork for the area.

Interested in the theme of time, the architects looked at a key event in the city's history, when King Charles I was denied entry into the city three times, at 11am, 5pm, and 6pm, on 23 April 1642 – regarded as a major prelude to the English Civil War.

The event that took place at Hull's nearby Beverly Gate, led the architects to create an installation that highlights key points in the city's history.

Their resulting design, which was constructed by metal fabricators Pearlgreen, is a two-sided structure composed of undulating stainless steel sheets that meet to form a diamond-like motif. 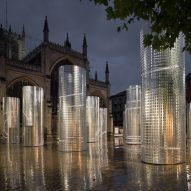 Its perforated elevations feature 16 larger openings that each represent a different time and date of Hull's past.

As the sun's light streams through an aligned pair of openings, it falls on a circular disc on the floor printed with text that describes a historical event.

"The 16 carefully selected dates of solar alignment will spark conversations about Hull's history and its future, following its momentous year as UK City of Culture," said Alex Woolgar, an associate at Tonkin Liu.

"By using what nature gives us for free, in this case the sunlight in Hull, Solar Gate is a time-based artwork truly bespoke to the city."

To make the Solar Gate appear lightweight, the architects employed a technique called shell lace structure that they have been developing with engineers Arup since 2009. Intended to echo the form of a mollusc shell, the installation's subtly curved and ridged exterior eliminates the requirement for any internal support.

For this project Arup also experimented with the incline of the steel sheets' undulations, aiming to maximise stress at the seams so that more material could be punctured elsewhere.

At night the Solar Gate is illuminated by ground-level lighting that's been added to the inner and outer sides of the installation, which give the installation varying levels of transparency.

Keen to also reference Hull's maritime past, the architects also decided that the installation be spray-painted white in reference to the sails of a ship.

Tonkin Liu's Solar Gate was erected in summer last year, coinciding with Hull's status as City of Culture 2017. A handful of other practices created installations to mark the special event – architecture duo Pezo von Ellrichshausen erected 16 outdoor rooms that incorporated optical illusions, while Jason Bruges Studio put together a "cast" of 20 robots that interacted with their surroundings.