New York studio T W Ryan Architecture has renovated a black house in the Long Island beach town of Montauk, using pale finishes inside to contrast the dark exterior of the gabled forms.

Surf House comprises a couple of connected pitched-roof volumes on a sandy lot in Ditch Plains – a famous surf spot in Montauk – and spans 1,905 square feet (177 square metres). Two rows of houses separate the project from the beach.

T W Ryan Architecture gutted and transformed the home for a young family, originally from coastal Ireland and now based in New York City's West Village.

The studio retained much of the exterior, but altered the layout – initially a garage in the lower gabled section and three small rooms squeezed into the top of the two-storey portion.

A new wrapping stairwell housed inside a small extension now leads up to the upper floor, where the main living areas are located. Below are three bedrooms and a large bathroom, complete with an outdoor shower.

"The new stair location allowed space for a new entry hall, indoor/outdoor bathroom, and for the garage to be converted into a bedroom," studio founder Thomas W Ryan told Dezeen.

Upstairs is a sitting area with a wood-burning fireplace and a powder room. A kitchen and dining table are situated on the opposite end, with an uncovered terrace adjacent.

"The rabbit-warren of rooms on the top floor was completely opened up, exposing the structure and opening toward the beach with a new series of sliding doors leading out to an expanded deck," said Ryan.

Ship-lap black cedar is laid vertically across the exterior, while the extension is lined with a "corduroy" of cedar battens. 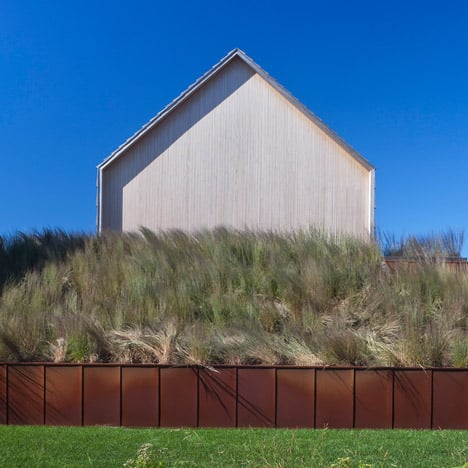 The simple black exterior blends with the shadows of the landscape, while light-filled rooms provide a stark contrast inside.

"In the spirit of the early Hamptons work of architects such as Richard Meier and Charles Gwathmey, traditional materials are made contemporary through a reductive colour palate and the use of pure, primitive forms," the architect said. "The house embraces the natural materials, finishes and landscape traditional to the area."

Whitewashed pine walls are found throughout the interior, with concrete floors on the lower level and light wood upstairs. In the main living room are exposed beams, painted white to match the gable walls. Much of the vintage furnishings are coloured black to contrast the pale materials, while providing a visual link to the dark exterior.

Montauk is one of many Long Island towns, like those in the Hamptons, used as a getaway by New Yorkers. Homes in the area often have a rustic appearance, as seen at a shingled residence that celebrates local Quaker heritage by Bates Masi Architects, a contemporary concrete house embedded into a slope by Leroy Street Studio, and a farmhouse clad in charred cypress by MB Architecture.

Photography is by Scott Frances/OTTO. 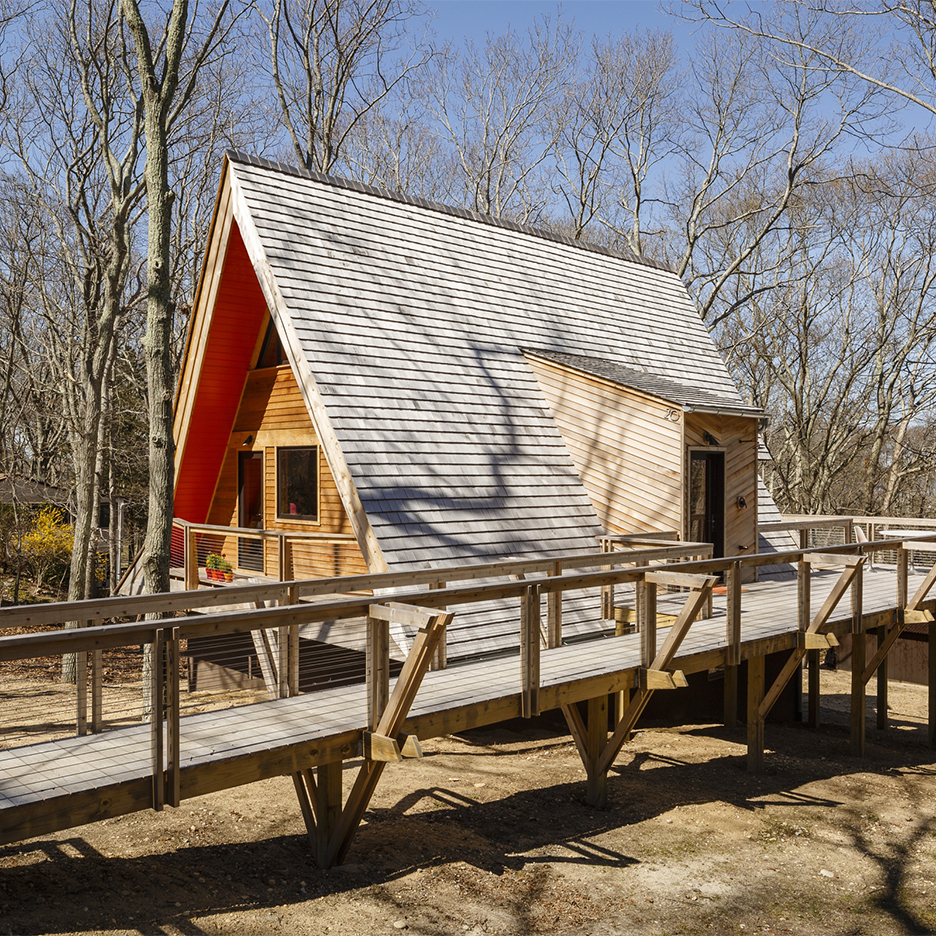