The arena being designed for the City of Arlington and developer Esports Venues will be "the largest and most flexible esports stadium in the country" according to Populous.

Along with the main competition arena, the venue will contain a broadcast studio, hospitality suites, shops, gaming spaces and team training areas for esports – competitive computer gaming tournaments that can be streamed online or take place in front of a live audience.

"This esports stadium will transform the Arlington Convention Center and position the city as the epicenter for esports in the heart of North America," said Brian Mirakian, senior principal at Populous.

The project will see the existing Arlington Convention Center converted into a 1,000-seat dedicated esports arena for gamers.

Millions of people watch professional gamers play online. The huge popularity of competitive multiplayer gaming has led to an increasing demand from fans wanting to see esports stars in the flesh.

At a typical esports tournament young gamers compete in team battle or strategy games on stage, while the action is projected on large screens around the arena. The genre has exploded in recent years, with the top esports stars already earning millions of pounds each year in prize money.

By 2020 the global audience for the computer gaming tournaments is predicated to be 600 million people, with the industry expected to generate £1 billion in revenue every year. 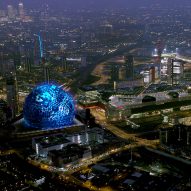 Events regularly take place in large venues around the world, including Herzog & de Meuron's Bird's Nest Stadium in Beijing and the Staples Centre in Los Angeles. Now the continued demand from fans is leading to dedicated esports arenas being built.

In London, for example, Populous is creating a spherical venue that has been designed to be used for esports.

The City of Arlington believe the Esports Stadium Arlington will help the city become a centre for this new emerging digital sport.

"I know the gaming community across the globe is going to fall in love with this stadium and with Arlington," said Arlington mayor Jeff Williams.

"We're ready for the biggest tournaments in the esports industry to call Arlington home."

The esports arena is set to open its doors later this year. It will be located near major sports venues the AT&T Stadium and Globe Life Park.

Populous is currently working on several stadiums for traditional sports including the renovation of the modernist Seattle Stadium, and the David Beckham's football stadium in Miami.