Completed last year in the Laurentians region, the two-storey De La Canardière Residence encompasses four bedrooms. Its location on a slope was a key factor in the studio's development of the design.

"This project sprouted along the shores of a lake up in the Laurentians in a wooded area with a significantly consistent slope," said Atelier Boom-Town.

"This elevation, which offers a bird's eye view of the lake, is the backbone for the development of this architectural concept – grasping hold of the land through the blending of two areas intersecting one another."

Entrance to the 3,600-square-foot (335-square-metre) residence is from the lower level, where the architects laid out the home's communal areas, as well as a garage.

The eastern end of the longitudinal volume is made up of an open kitchen and dining room, which is separated from the living room by a short flight of steps.

An open staircase leads to the bedroom level, which is roughly perpendicular to the ground floor. "The upper area, which takes on the shape of a distinctive gabled-roof house, looks out to the lake through a cantilever, while the lower area anchors to the slope," the architects said.

A long corridor running from east to west organises the home's four bedrooms. The two largest are located at either extremity, and have their own bathroom. Two smaller bedrooms sit between them.

Residents have access to a terrace on this level, providing better vistas of the lake below. 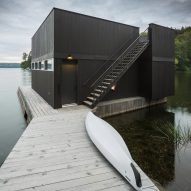 The architects clad the house in black to blend it into its wooded surroundings. "From the outside, sober colours and raw materials allow the project to assert itself in full nuance, as if it had emerged from the ground, respectful of its environment," the studio said.

This contrasts the interior, where black-and-white finishes provide a more minimalist feel. Certain accents include dark wooden floors and a dramatic marble bathroom.

The mountainous area is popular as a place for second homes. Others include a home with a cantilevered roof that was modelled on a bird's wings and a stepped home by Atelier Pierre Thibault.

Photography is by Steve Montpetit. 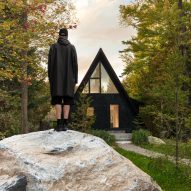