Selldorf Architects has revealed plans for a renovation and expansion of the Frick Collection museum in New York City.

Selldorf Architects plans for the biggest overhaul of the Frick Collection since the Manhattan art museum opened in the 1930s, includes adding a extension to the museum's library and opening parts of the Frick residence to the public for the first time.

The scheme would also see a garden located on East 70th Street restored to its original design, with designer and preservationist Lynden B Miller leading the project.

A protest against plans to build on this green space designed by Russell Page led to the previous Davis Brody Bond-designed extension being cancelled in 2015.

In total, the overhaul would increase the total display space at the museum, which was designed by architect John Pope in the 1930 to showcase industrialist Henry Clay Frick's collection, by 30 per cent.

The architects also propose transforming the basement beneath the Page-designed garden into a 220-seat underground auditorium.

In the Frick family residence rooms on the second floor will be opened up and transformed into galleries that are planned to display smaller artworks and will be left with existing details, like fireplaces and mahogany wall panelling.

According to the architect the design aims to make subtle changes to the museum that are suited to the existing building.

"Our proposed design is the result of an unwavering commitment to maintaining the intimate experience of viewing art at the Frick that is unique and special to so many – myself included," said Annabelle Selldorf. 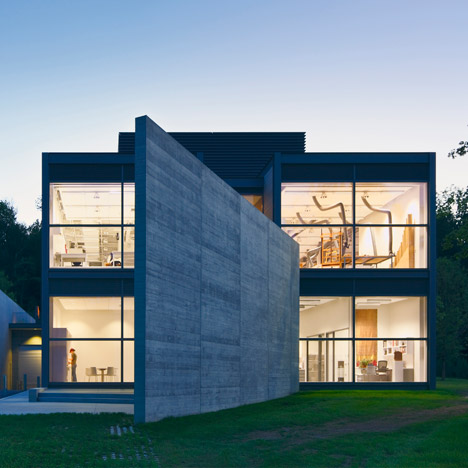 "With interstitial architectural interventions, we are able to provide clear and coherent new spaces with seamless connections that will allow the Frick to more thoroughly enact its mission in the 21st-century," she continued.

"The project harmoniously integrates the historic with the new and addresses all areas of the institution, which encompasses a number of buildings and additions made over the course of the past century," added The Frick Collection's director Ian Wardropper.

The plans also include improvements to the museum's circulation. The existing reception hall will be reconfigured, while a new staircase, designed to reference the stair in the Frick family home, and elevators will lead up to a new floor above the hall.

This level will contain a shop, and the museum's first café.

Other additions include a purpose-built education centre, a new conservation for both museum and library collections and improved ADA access.

The design was approved by the Frick Collection last week, and now awaiting consent from the New York City Landmarks Preservation Commission and New York City Board of Standards and Appeals.

Selldorf Architects, which was founded by Annabelle Selldorf in 1988, has become a go-to for major gallery projects, with previous designs including a Los Angeles outpost for Switzerland-based art gallery Hauser & Wirth and new spaces at the Clark Art Institute in Massachusetts, designed with architect Tadao Ando.