This fly-through video created for the NLA's annual London Tall Buildings Survey shows how over 500 towers currently proposed for London will affect the capital's skyline.

The digital model of London was created by VU.CITY for New London Architecture (NLA) as part of its fifth annual London Tall Buildings Survey, which was published today.

Over 500 tall buildings forecast for London

But there was a notable slow down in both the number of tall buildings completed in 2017 – down to 18 from 26 in 2016 – and the number of planning applications that fell by 10 per cent.

This anomaly is attributed by the report to the clearance of planning for a bumper crop of 40 tall buildings as part of the redevelopment of the Greenwich Peninsula in previous years.

Over 90 per cent of the tall buildings proposed for London are residential schemes, which are expected to provide around new 106,000 homes for the capital's ever-expanding population.

Living in high-rise buildings is becoming "increasingly accepted", according to the report, which attributes the rise in tall residential blocks in part to the build-to-rent boom.

The 2017 survey showed 30 per cent of proposed schemes were build-to-rent. When the NLA began its annual tall building survey in 2013, none of the projects fell into this category. 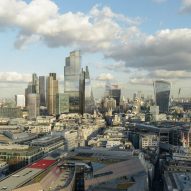 Record-breaking number of skyscrapers completed in London in 2016

"We continue to see a steady increase in the number of tall buildings coming forward and with London's population continuing to increase and the demand for new homes only getting higher, our view remains that that well designed tall buildings, in the right place, are part of the solution," said NLA chairman Peter Murray on the release of the report.

"Uncertainties and challenges to deliver these tall buildings remain, which is perhaps why we are seeing a slight slowdown in the in the number of applications, construction starts and completions," continued Murray. "However our reports over the past five years show us in the right places, towers allow us to use the finite resource of land very efficiently."

Most towers are to be built in Tower Hamlets

Two thirds of the buildings are proposed within central London, while the other third are to be situated in "opportunity areas" around transport hubs in outer zones including Croydon.

The borough of Tower Hamlets in east London is expected to see the largest number tall buildings, closely followed by Greenwich, due to the peninsula scheme, and then Southwark.

Seven of London's borough's were free of tower proposals in 2017 – Bexley, Enfield, Havering, Hillingdon, Merton, Kensington and Chelsea, and Richmond – while Bromley and Waltham Forest have towers in the pipeline for the first time.

The opening of Crossrail in 2019 will be the "catalyst" for development in outer boroughs including Ealing, Redbridge and Newham, according to the report.

Earlier this year CGIs commissioned by the City of London Corporation revealed how the city's skyline could look by 2026 – with the addition of 13 skyscrapers, including one expected to be 290 metres high.

Next up in the series is a free talk on 27 April 2018 that will explore how Brexit is impacting the number of tall buildings in London, amongst other trends.