Architecture firm Studio Saxe has stepped a series of pavilion-like guest rooms down a slope facing the Pacific Ocean, creating a hotel in a Costa Rican beach town.

Mint Santa Teresa is located in Santa Teresa – a small coastal town in Costa Rica's Puntarenas Province that is a popular spot for surfers and yoga retreats.

The hotel's Swedish owners Jonas Thorrel and Johanna Johansson enlisted San José-based Studio Saxe for the project following the studio's previous work in Costa Rica, including a house also in Santa Teresa and a yoga retreat, which are well-integrated with tropical foliage.

Like with these earlier works, the studio designed the holiday complex to fit in with its surroundings. Four guest bedrooms are separated into individual volumes to step down the hilly site, resting on terraces made of stone. Gaps left between the suites leave space for trees to grow up through.

"Hotels traditionally became vast objects in the landscape that bear no relation to their surroundings and are devoid of genuine human interaction," said studio founder Benjamin Garcia Saxe.

"At Mint, we endeavoured to create a contextual design that adapts to its landscape and offers a new type of experience for a breed of traveler seeking authenticity."

As with the studio's other projects, Mint Santa Theresa has a simple minimal palette that comprises a black steel structure, concrete flooring, and white paint and textiles that contrast with the lush greenery.

But this time, the Studio Saxe intended to reference the minimal aesthetic of Scandinavia in response to the heritage of the resort's owners.

Costa Rican designs also feature throughout the complex, like the caña brava grass arranged in a fishbone pattern to cover the underside of pavilion roofs, and furniture made by craftspeople using locally sourced wood.

Running down the slope in pairs, the pavilions contain a bedroom and adjoining bathroom in the same layout.

Folding glass doors open onto terraces in front, to provide guests with ocean vistas from the beds. A small void is carved at the rear of each, forming a garden filled with more tropical planting.

An exterior staircase at the side of the residences leads onto a decked pathway, which extends over the green space to access a rooftop living area.

Wrapped by a black balcony, which also serves as a planter, the outdoor lounge is shaded by a white sail stretched above by a black steel frame. A hammock also hangs from the structure, while other furnishings include two chairs made of rattan – thin palm stems – and produced in Cost Rican town Sarchí, a table and a rug.

The Mint Santa Teresa's communal area is located at the bottom of the slope, accessed by a central concrete stair. A grass-lined canopy resting on slender black columns extends over the space, covering a bar and a lounge with large floor cushions for sunbathing.

Draping plants run along one side to provide privacy to the dining area, where guests have breakfast, from neighbouring properties.

A key feature is an infinity swimming pool that runs off the edge into a slim channel of water beneath. There is also a pit for guests to play boules.

"We worked hard on creating spaces that combine an appreciation of natural beauty with a rich array of possibilities for social and cultural interaction," said Garcia Saxe.

The architect founded the firm in Costa Rica's capital city in 2004. Studio Saxe's other projects across the Central American country include a house elevated on stilts above a forest and a residence featuring fully-outdoor rooms that can be enclosed by folding timber doors.

Photography is by Andrés García Lachner. 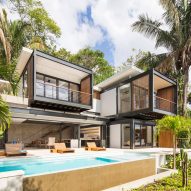