A sloped roof tops this white house in Brazil's capital, which architecture studio Bloco Arquitetos built within the initial masterplan for the city.

The local firm designed 711H house for a couple with a child and two dogs.

Built on the foundations of a single-storey home that had been demolished, it is located in a part of the Plano Piloto masterplan that architect and planner Lucio Costa designed for Brasília during the 1950s.

The residence's surrounding area was originally intended to be used for farms and food production, but because of the city's housing needs, it was transformed into a series of tightly packed row houses.

Many of the homes exceed the allowed height limit and face a service alley, which makes the green public spaces in the front derelict and dangerous, according to Bloco Arquitetos. The studio's scheme for the 711H house aims to reverse this trend.

The team uncovered and restored the front yard back into a garden. Two pairs of white metallic screens front the space to offer the residents privacy and provide access to the public green space in front of the house.

"It acknowledges the present reality, and its official and unofficial rules of occupation, and aims to recover the activation of the green strip that is adjacent to the house," said Bloco Arquitetos.

With a white exterior that also differentiates it from its surroundings, the house is topped by a mono-pitched roof that connects the different roof heights of its two immediate neighbours.

"The form of the roof is generated by an imaginary line connecting the highest point that is officially allowed for the constructions in the neighbourhood to the slightly sloped roof of the construction on the other side," said the firm.

A second set of perforated metal doors are placed on the inner side of the courtyard, as part of the front wall of the house. One folds open to lead into the long and narrow, kitchen, living and dining room. The other provides access to a pair of bedrooms with en-suite bathrooms that run down the southern side.

As most of the old structure and foundations were condemned, the studio rebuilt the ground floor using laminated steel beams and columns with exposed concrete blocks forming the partition walls. All are painted white to match the exterior.

Concrete ceilings and floors are left exposed and complemented by furnishings with rough finishes, like the dining table that extends from the kitchen counter and a bench in the living area. Plants in terracotta pots are dotted throughout to offset these more neutral tones.

A black staircase leads up to the middle of the new first floor, which the studio constructed from concrete blocks.

Because of the steep slope of the roof, all the functions are placed along the southern side where the pitch is at its highest. A large terrace, where the residents' dogs can bathe in the sun, occupies the north-west end.

Glazed doors from the terrace lead into the master bedroom at the front. The space is adjoined by a long closet featuring windows to a small void in the residence, and an en-suite bathroom.

A study and a small home office are set to back on this floor.

Bloco Arquitetos was founded by architects Daniel Mangabeira, Henrique Coutinho and Matheus Seco. The firm recently completed another home nearby, made of longitudinal concrete ribs and red brick infill.

Along with Costa's masterplan, Brasília is well-known for its modernist architecture by Oscar Niemeyer. His building that serves as the presidential palace is feared haunted by the country's current leader. 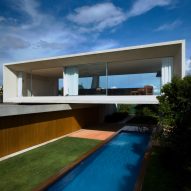