The headquarters of Facebook, Apple and Google feature in this series of relief sculptures by artists Ben Langlands and Nikki Bell.

The artists, known collectively as Langlands & Bell, created the pieces for an installation at the Ikon gallery in Birmingham called Internet Giants: Masters of the Universe.

The artworks are based on the offices of some of the world's largest technology companies. Each is made by hand, from a combination of white-painted card and wood.

Langlands & Bell created the artworks as they believe technology companies are becoming increasingly powerful, but that we can learn a lot from the buildings they occupy.

"The internet giants continue to grow exponentially, becoming ever more powerful by the day, and are exercising an increasingly profound influence on our lives," Langlands & Bell told Dezeen.

"They are reshaping the cultures, politics and economies of the planet comprehensively."

The project began after the pair saw plans for Apple Park, and learned that many other "internet giants" had recently built or were building new headquarters.

"The plans were so spectacular and ambitious we realised that this was a significant moment, not just in the development of the companies themselves, but in all of our lives," they said.

"We realised that for the first time these companies whose intangible and rather opaque activities are by turns enabling and controlling, were now making definitive statements about their intentions and ambitions in a language that we could all understand."

Along with Facebook, Apple and Google's headquarters, three further buildings in the US are included in the display – the Bill & Melinda Gates Foundation's office in Seattle designed by NBBJ, Apple's campus in Sunnyvale California designed by HOK and computer component manufacturer Nvidia's Californian base by Gensler.

"We don’t want to be distracted by decoration or peripheral agendas, we're interested in the essential appearance and structure of the building, both for its intrinsic aesthetic value, and for what it says about the intentions of the client and the architect," explained the duo.

According to the artists, the offices' forms are broadly based on long-used simple architectural forms or consciously futuristic designs.

"Either they engage timeless and universal typologies, the circular plan, an idealised harmonised enclosure, the ring structure, as with Foster's design for Apple, or they are futuristic anecdotes with a kind of extra-terrestrial Sci-fi approach, such as Nvidia’s huge new HQ at Santa Clara," they said.

The artists hope that the exhibition will encourage people to consider the role of tech giants in the modern world and ask whether the buildings they are creating will define the 21st century.

"We wonder whether this new genre of architecture will be era-defining: the architecture of the 21st-century. Will these huge and expensive buildings last and rival the Colosseum, Versailles, or Stonehenge?" they said. 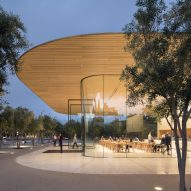 Langlands and Bell have been collaborating together for 40 years. The Internet Giants: Masters of the Universe exhibition is on show at the Ikon gallery in Birmingham until the 10th June 2018.

Exhibition photograph is by Stuart Whipps.