Connective joints are "design projects in their own right", according to the curators of the huge U-Joints exhibition during Milan design week.

These design products were exhibited alongside more basic, technical examples of joints, such as traditional sailing knots and scaffolding components.

By offering such a vast range of connections and examples of their applications, the exhibition aimed to offer an all-encompassing look at the multifaceted world of joints.

Morrison demonstrated how the circular dovetail joint, incorporated in his Basel chair for Vitra, successfully connects the plastic seat and backrest to the wooden structure, while retaining the classic form of the Frankfurt chair that its design is based upon.

Meanwhile Charpin employed a more simple technique, using three rubber bands to join together various objects that he found in his studio.

The French designer was drawn to using elastic bands as connectors as they allow for endless construction and deconstruction, as opposed to a fixative like glue.

Arranged neatly across tables dressed with white tablecloths, the show featured some the most commonplace and overlooked connections found in the domestic sphere, like elastic bands or plumbing parts, as well as some of the more complex joints used in the construction of large-scale architecture.

"The show was born out of a certain state of irritation with our instant visual world, where an image or a design needs to be perceived in a second," co-curator Anniina Koivu, a design writer and professor at ÉCAL, told Dezeen.

"It becomes difficult to focus on the details. The non-specific seems to win over precision. And joints tend to get lost in the whole. But actually it is the details that carry an entire project. The details determine between solely good-looking design and truly good design."

U-joints co-curator, architect Andrea Caputo added: "The theme of the joint is a kind of obsession for the great majority of students and young professionals: a sort of compulsory style exercise, and part of contemporary culture. Nevertheless, inexplicably, joints have not been researched as a whole."

"U-Joints is the first bold attempt to bring the different worlds of joinery together – a synthesis of the eclectic and infinite universe that is the invisible background of our everyday life," he continued. 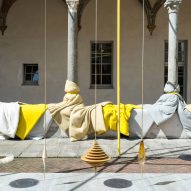 The curators chose to highlight joints such as Adrien Rovero's flying hinge, which they said became "something of the show's mascot", as well as Anthony Guex's wooden cabinet that has an "ingeniously hidden" hinge.

Another celebrated connection was the clamp in Industrial Facility's recently-launched Tumbler lamp for Santa Cole, which was directly inspired by a scaffolding system – the tubi innocenti, invented by Ferdinando Innocenti. According to the curators, it "fundamentally changed our built environment until today".

As well as modern-day joints, the show also drew attention to traditional Japanese and Chinese wooden joinery, specifically the wooden brackets used in the construction of Chinese temples, which are built without the use of nails, yet still stand as some of the most "earthquake-resistant" structures in history.

"Joints are design projects in their own right," said Koivu. "Even a simple screw is beautiful and ingenious if you take the time to look at it properly. Indeed, to some, the screw is the smallest piece of furniture."

"As Charles Eames put it: 'The details are not the details; they make the product'," she concluded.

Presented in collboration with Juventus football club, U-joints was held during the city's annual design festival between 17 to 22 April 2018.

The annual design week also saw curator Ditte Hammerstrøm create an exhibition of Danish design focused on tactility, sensuality and hands-on engagement, and saw Vitra present hundreds of items from its archives for its Typecasting exhibition.