Students from Design Academy Eindhoven temporarily revamped a pair of Milan streets, adding a coffee shop where customers have to grind beans themselves and a newspaper stand selling fake news.

During Milan design week, students took over Via Piestro Crespi in Milan's NoLo district, creating a series of 12 interventions that aimed to question the role of design in everyday interactions.

Working with a range of existing venues, from a hardware store to a nightclub, Not For Sale offered new approaches to typical day-to-day activities for residents of the Italian city.

"By embedding the graduate projects in existing venues along an entire street, Not For Sale intends to evoke fresh thinking and find new meaning in commonplace culture," said the team behind the project.

"Provocative, challenging and unexpected design proposals are literally integrated into the urban setting along Via Pietro Crespi and Via Varanini, ending in Piazza Morbegno. All 12 projects, each in their own way, make us slow our pace and rethink the real value of design."

The first installation in the series was the Basic Income Café by Martina Huynh. It invited passers-by to receive a free half cup of coffee, or "free cup of basic income", which was served via a transparent, oversized model of a Bialetti coffee maker.

They were then invited to grind more beans at a workstation for another portion of coffee. Afterwards, they would be asked to clean their cup for the next person.

The aim was to make the concept of a basic income – a regular, liveable and unconditional sum of money provided to citizens of a country by its government – into a tangible experience.

"It's a complex installation, disguised and placed in a familiar context," said Huynh. 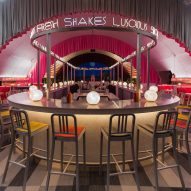 "It works as a regular cafe where people meet and socialise over a cup of coffee. Even if they don’t talk about the concept of a basic-income system, but about personal stuff, it's still the system that provides for this moment, free of charge. The experience is still that of receiving something unconditionally."

Another project which explored economy was offered by Marie Caye and Arvid Jense. Their "self-owning soda machine", named SAM, made freshly brewed kombucha in return for money – showing how a robot might earn a living.

"The robot is real, working and earning money. If it doesn't make much income, SAM might die from a lack of electricity," said Caye. "SAM trying to make a living in a human world is as 'everyday' as it gets."

SAM was presented inside local covered market Viale Monza. The market also provided a setting for Billie van Katwijk to present her leathery material made from discarded cow stomachs.

In the Anaesthesia nightclub, Donghwan Kam showcased the images of his After-Photography project.

The designer creates video-game-like renderings of iconic moments of contemporary mass media, such as rescue boats arriving at the Sicilian harbour of Trapani to collect refugees. His aim is to create the experience of a "gamified refugee crisis".

"The image of the refugee boat is so familiar to us and at the same time so objectified," he explained.

"Because of the repetitive nature of the images, we are no longer responsive to the actual events. By bringing the images into the realm of virtual experience, I defamiliarise the press photos."

Elsewhere, Irene Stracuzzi wanted to question the role of graphic design in spreading information by creating Misinformation Times, a paper containing "real news about fake news". This was showcased at a newspaper kiosk.

"Hopefully [this] will encourage people to develop a more critical attitude towards the news they hear or read," said Stracuzzi. "It would be nice if the newspaper were integrated into normal life like a 'real' newspaper, and recycled in a variety of ways."

Other highlights from the exhibition included a bunker-like capsule, designed by Alice Bleton as an escape from city life, and Lauren Leerdam's Paperthin stools, which are made from tin cans to highlight "one of the biggest icons of consumerism".

The Design Academy Eindhoven team believe the message behind these projects is stronger shown in the context of the street.

"Design provides us with the building blocks of society — commodities such as the plate of pasta, the newspaper, the screwdriver, the coffee pot," said the team. "It is how these things come together, though, that makes a place what it is."

Not For Sale was on show for Milan design week, from 17 to 22 April 2018. Other exhibitions that took place across the city included a house 3D printed in concrete by a portable robot, and a showcase of colourful capsule homes.